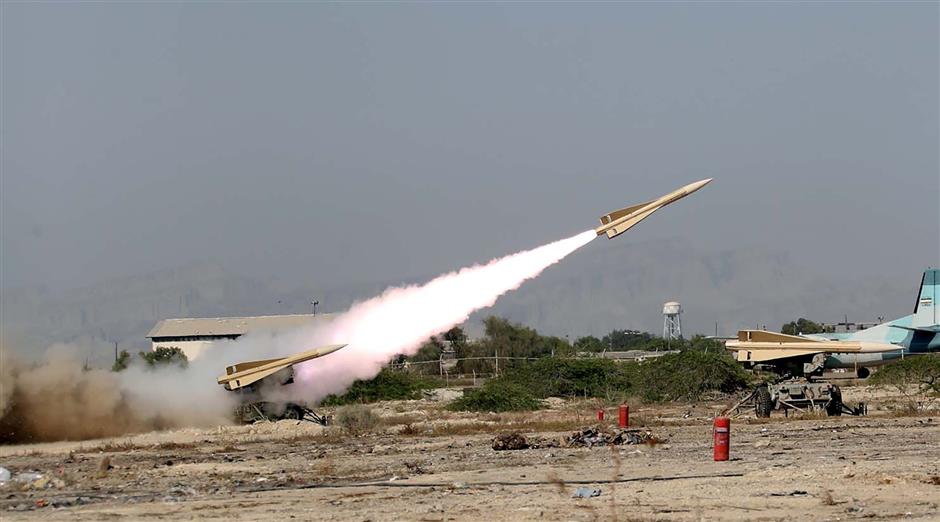 A missile is launched during the annual military drill, dubbed “Zolphaghar 99,” in the Gulf of Oman with the participation of Navy, Air and Ground forces, Iran on Tuesday.

Iran’s military on Thursday began an expansive annual three-day exercise near the strategic Strait of Hormuz, state TV reported, with the maneuvers taking place amid heightened tensions between the Islamic Republic and the US.

Units from the navy, air force and ground forces are participating in a nearly 2-million-square-kilometer area of the Gulf of Oman.

State television said Iranian submarines and drones were being deployed.

State TV aired footage of the launching of various short range surface-to-surface and surface-to-air missiles and of jet fighters and airborne troops descending on vessels including a submarine.

One of the missiles hit a drone from a mock enemy.

“Marines and commandos ... infiltrated at subsurface, surface and air levels by using domestic equipment built by the defense ministry and our scientific and industrial centers,” said Admiral Shahram Irani, the military’s spokesman for the exercise.

On Wednesday, commander of the annual exercise dubbed Zolfaghar-99 Habibollah Sayyari said the operation is aimed at “improving readiness in confronting foreign threats and any possible invasion.”

Sayyari’s comments hinted at the threat of military conflict amid tensions between Iran and the US, which has sought to extend a years-long UN weapons embargo on Tehran that is due to expire in October.

The US Navy’s 5th Fleet, which patrols Mideast waterways, declined to comment on the exercise.

Iran’s navy operates in the Gulf of Oman on the eastern side of the strait, through which 20 percent of global oil shipping passes.