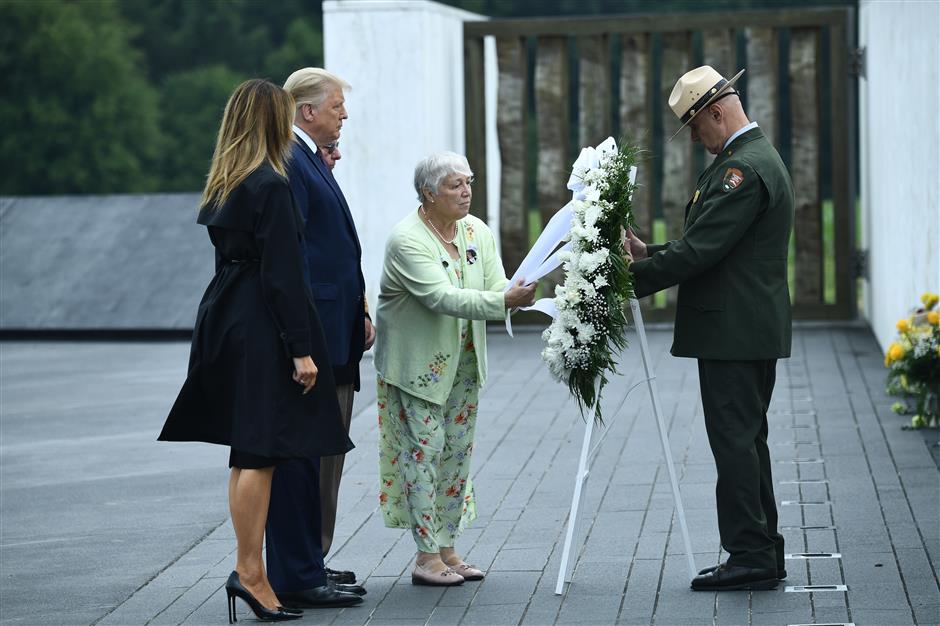 US President Donald Trump and First Lady Melania Trump, with Ed Root (behind Trump), cousin of flight 93 attendant Lorraine G. Bay; and Nancy Root (center), his wife, lay a wreath during a ceremony commemorating the 19th anniversary of the 9/11 attacks, in Shanksville, Pennsylvania, on September 11, 2020.

US President Donald Trump struck a somber tone on Friday on the anniversary of the September 11, 2001, attacks as his Democratic rival Joe Biden comforted relatives of victims — in dueling bids to unite a deeply divided nation.

Nineteen years after the devastating Al-Qaeda attacks, former vice president Biden began the day in New York for an annual event honoring the nearly 3,000 who died in the destruction of the World Trade Center.

Trump did not attend the ceremony in his home city, sending Mike Pence instead. Biden and the vice president tapped elbows and chatted briefly.

The Republican president instead traveled to Shanksville, Pennsylvania, where an airliner crashed after passengers tried to wrest control of the jet from the hijackers.

The president and First Lady Melania Trump listened in silence as the names of the 40 passengers and crew killed aboard Flight 93 were read aloud — with two bells tolling after each.

In brief prepared remarks, the incumbent — who is hoping to defeat Biden and win a second term — paid "tribute to their sacrifice" along with all those who perished in the attacks.

He also honored first responders as well as military personnel who fought to "preserve our freedom" in the subsequent wars launched under former president George W. Bush.

"We resolve to stand united as one American nation, to defend our freedoms, to uphold our values, to love our neighbors, to cherish our country.... and to never, ever forget," Trump said.

It was a rare call for unity from a leader who normally plays political divisions to his advantage.

Biden also traveled to Shanksville but there was no chance of the rivals crossing paths, as Trump left well before the Democratic candidate and his wife Jill arrived.

As a few hundred spectators watched from the Flight 93 national memorial park, Biden laid a wreath of white flowers at the stone bearing the victims' names.

He and Jill again spoke with families, later meeting with local firefighters to whom the couple brought sweets and beer. 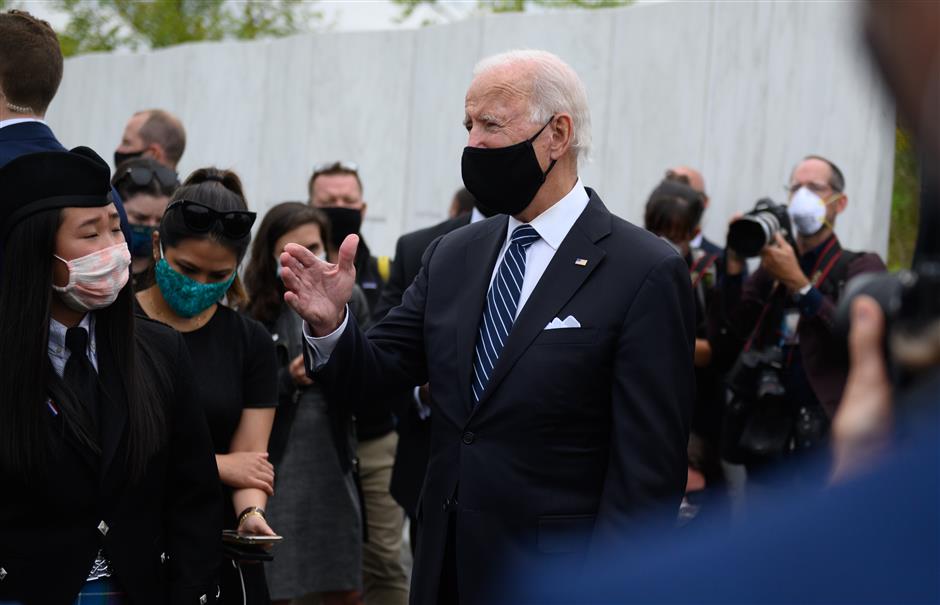 Democratic presidential nominee and former Vice President Joe Bidenand his wife, Jill, talks to the press after greeting family members of victims and laying a wreath at the Wall of Names following a ceremony at the Flight 93 National Memorial commemorating the 19th Anniversary of the crash of Flight 93 and the September 11th terrorist attacks on September 11, 2020, in Shanksville, Pennsylvania.

At his first stop in New York, Biden did not deliver a speech — the ceremony generally reserves that privilege to the close ones of victims — but his mere presence drew attention at an event broadcast live on main US television networks.

The ceremony was as usual punctuated by poignant moments of silence, the first one coming at 8:46am (12:46pm GMT), when the first plane hit one of the Twin Towers.

The 77-year-old Biden — wearing a mask — appeared in his element at the relatively crowded event, surrounded by people after months of keeping a low profile in line with coronavirus prevention measures.

At one point, he sought common ground with a 90-year-old woman whose son died at age 43 in the attacks, reflecting on the loss of his own son Beau to cancer.

"It never goes away," the pair told each other.

In addition to stopping by the official Ground Zero museum ceremony, Pence attended another nearby foundation-organized commemoration where some 100 relatives gathered to read the names of love ones they lost.

The vice president delivered a brief address and his wife read a verse from the Bible.

None of the appearances featured prominent political showmanship, though the ceremonies were closely followed by the media and gave the candidates what political scientist Robert Shapiro dubbed a chance to "show their leadership and empathy."

The choice of Trump and Biden to both head to Pennsylvania, a vital election battleground state, illustrates the "obvious calculations" their advisers have made, the Columbia University scholar said.

Polls show Trump and Biden nearly even in Pennsylvania, and Democrats hope to win the state back in the November 3 vote.