16 dead in US wildfires as cool weather brings hope 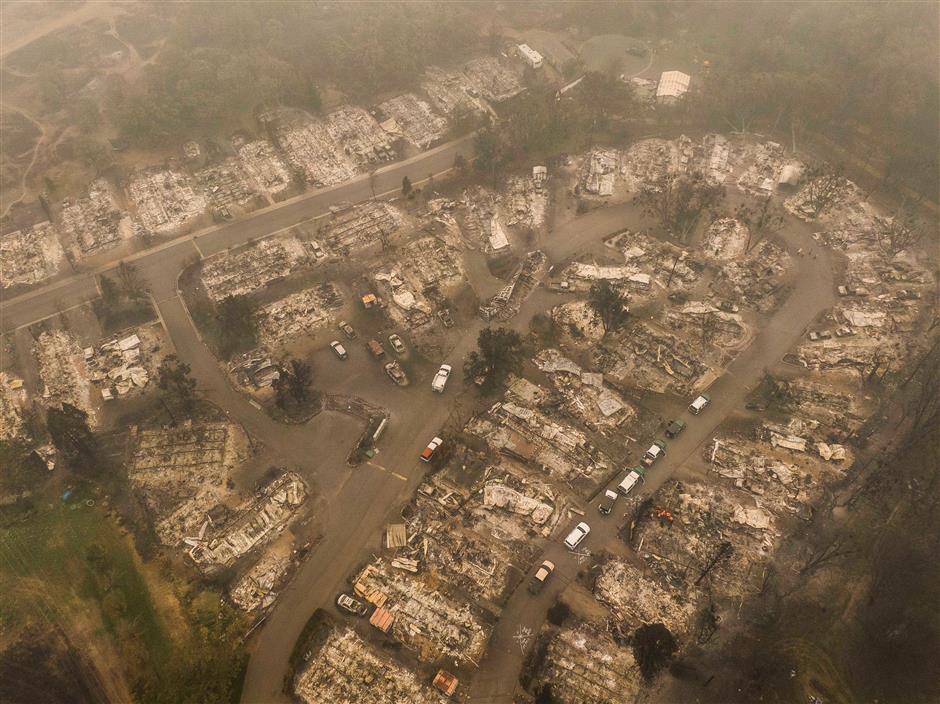 In this aerial view from a drone, search and rescue personnel from the Jackson County Sheriff's Office look for the possible remains of a missing elderly resident in a mobile home park on September 11, 2020, in Ashland, Oregon.

More than 20,000 firefighters from across the United States on Friday battled sprawling deadly wildfires up and down the West Coast as the arrival of cooler weather offered hope of a respite.

The true scale of the destruction from dozens of massive blazes in California, Oregon and Washington states remained hard to gauge, with 16 deaths confirmed so far this week, but wide stretches still cut off by flames.

"We anticipate that number (of deaths) may potentially go up as we get back into areas that have been ravaged by flame and obviously, smoke begins to clear," warned California governor Gavin Newsom, as he visited a scorched forest near the raging North Complex Fire.

Ten people have been confirmed dead from that blaze in Butte County, which was driven at unprecedented pace toward the city of Oroville earlier in the week by strong, dry winds and soaring temperatures.

But Newsom said the weather "is beginning to cooperate," with winds settling down and some rain forecast in the coming days.

In neighboring Oregon, where 1 million acres have burned and three people are reported dead with dozens still unaccounted for, governor Kate Brown also expressed hope a corner had been turned.

More than 40,000 Oregonians have fled their homes so far, with some 500,000 under evacuation warnings, Brown told a press conference — clarifying previous higher figures given by state officials.

"The weather system fueling these fires over the past few days has finally broken down," she said.

"We anticipate cooler air and moisture coming in the next few days, which is really good news."

Dozens of people remained missing in connection with the fires, specifically in Jackson, Lane and Marion counties, Brown said.

Earlier in the week, Brown warned that Oregon could expect to see a "great deal of loss, both in structures and in human lives."

The August Complex Fire this week became by far the biggest recorded blaze in Californian history, ripping through 300,000 hectares of dry vegetation in the state's north, as multiple fires combined.

But it is just one of around 100 large fires on the US West Coast, and other rapidly growing blazes closer to populated areas have proven deadlier.

"We are at a complete loss for words right now," Bobbie Zedaker told the San Francisco Chronicle, after DNA tests proved her missing 16-year-old nephew was among those killed by the North Complex Fire.

Two more people were killed near the rural community of Happy Camp, a Cal Fire spokeswoman told AFP on Friday.

But in a mountainous region of central California, close to where the Creek Fire is burning, some members of an indigenous community refused to leave their homes despite evacuation orders.

"I don't feel it's going to come this way," said James Hancock, 52, whose home on the Cold Springs Rancheria Indian Reservation currently has no light, electricity or water.

"The ancestors didn't have any of that and they were fine," he told AFP.

Huge wildfires are becoming more common, with the World Meteorological Organization saying the five years to 2019 was unprecedented for fires, especially in Europe and North America.

Climate change amplifies droughts which dry out regions, creating ideal conditions for wildfires to spread out of control and inflict unprecedented material and environmental damage.

"I'm a little bit exhausted that we have to continue to debate this issue," said Newsom on Friday. "This is a climate damn emergency. This is real, and it's happening.

"This is the perfect storm."

California has already seen more than 3.1 million acres burn this year — an annual record, approximately the size of Connecticut — with nearly four months of fire season still to come.

Oregon officials have confirmed two deaths in the Santiam Canyon region south of Portland, and a third near the California border.