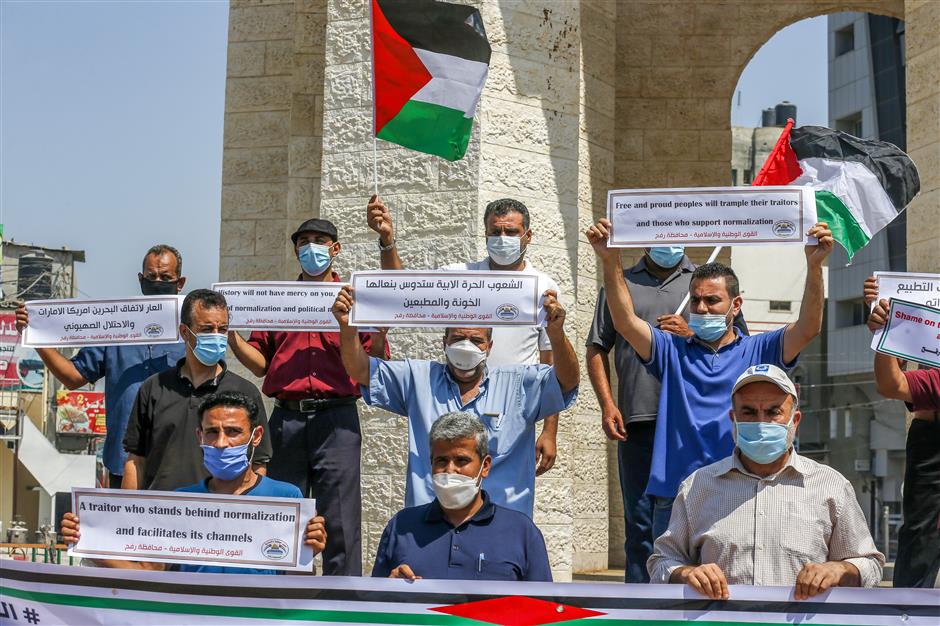 Palestinians carry placards during a protest in Rafah in the southern Gaza Strip, on Saturday, to condemn the normalization of ties between Israeli and Bahrain.

Iran on Saturday strongly condemned Bahrain’s plan to normalize relations with Israel, calling it a shameful and ignominious move by the Gulf Arab country.

“Bahrain’s shameful move sacrifices the Palestinian cause and decades of struggle ... at the expense of the US election,” Iranian TV quoted a foreign ministry statement as saying.

Bahrain’s normalization “will remain in the historical memory of the oppressed and downtrodden people of Palestine and the world’s free nations forever,” the statement added.

Iran’s paramilitary Revolutionary Guard denounced Bahrain’s move using similar language, calling it a betrayal of the Palestinian people and a “threat to security in West Asia and the Muslim world.”

The Friday announcement by US President Donald Trump made Bahrain the second Arab country in a month after the United Arab Emirates, and the fourth Arab country to normalize ties with Israel.

A long-held stance of Arab leaders is that an Israeli-Palestinian peace deal should be a prerequisite for normalizing relations.

Leaders of Palestine on Sunday called for demonstrations against the “shameful” deals. “We invite our population, in particular those in (Palestinian) refugee camps, to denounce these shameful agreements,” a statement read, signed by groups including the Palestine Liberation Organization and Gaza’s rulers Hamas.

It encouraged rallies outside embassies of the US, Israel, Bahrain and the UAE.

PLO Secretary-General Saeb Erekat referred to Washington’s longstanding policy of ensuring Israel is militarily stronger than other countries in the Middle East.

Arab nations are not permitted “to have any superiority on Israel on any field,” noted Erekat.

The country has longtime maintained its neutrality in a turbulent region.

Saudi Arabia has made no comment on the Bahrain agreement and has held back from striking a similar deal of its own.

The island of Bahrain lies just off the coast of Saudi Arabia, and its strategic location in the Persian Gulf long has made it a key trading port. It is home to the US Navy’s 5th Fleet and a British navy base.