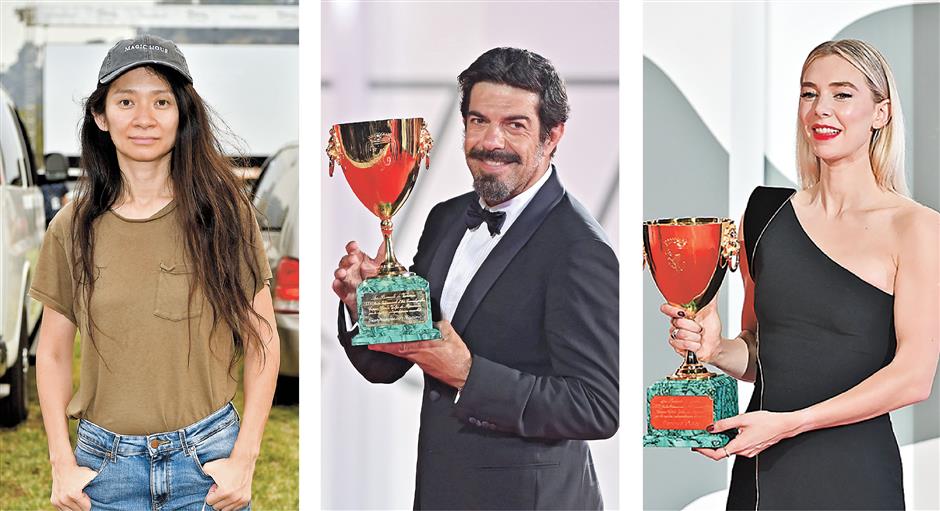 “Nomadland” by director Chloe Zhao scooped the top prize at the Venice film festival on Saturday, making her the first woman to win the Golden Lion in a decade.

The film, an ode to American wanderlust and the highs and lows of the open road, won the top honor in a competition billed as a relaunch of global cinema bruised by the coronavirus crisis.

Starring Frances McDormand, it is set among a motley tribe of ageing van dwellers, down on their luck and roaming the West. The double-Oscar winner plays a widow who takes to the road after losing her home.

Its Chinese-born director Chloe Zhao picked up the coveted award 10 years after Sofia Coppola’s 2010 win for her film “Somewhere,” in a year in which nearly half of the films in the main competition were directed by women.

Via Zoom, Zhao and McDormand appeared from the Rose Bowl in Pasadena, California — where the film had a US premiere on Friday — sitting inside the van used in the film.

“Thank you so much for letting us come to your festival in this weird, weird world and way,” said McDormand.

“We will see you down the road,” they said in unison, quoting a greeting used by the van dwellers in the film.

The 77th edition of the “Mostra” festival — presided over by Australian actress Cate Blanchett as jury president — took place in a year when theaters have been closed, film sets shut down and moviegoers forced to embrace streaming video at home instead, during months of lockdown.

Zhao, 38, is one of Hollywood’s hottest new talents, with Variety magazine having hailed her last film, “The Rider,” about a rodeo grunt, as a “mini-masterpiece.”

She is currently making the next Marvel movie, “The Eternals.”

“Nomadland” was loudly applauded when it premiered at Venice on Friday and had horns honking at a Pasadena drive-in cinema for its US premiere.

The Hollywood Reporter called the film “a unique portrait of outsider existence” while Variety said it was “a marvel of empathy and introspection.”

Zhao, who cast real van dwellers opposite McDormand, insisted the film was not political, but many saw it as a subtle allegory on US decline, with its humble heroes clinging onto the last threads of the American Dream.

Normally attended by more than 10,000 film industry executives, critics, journalists and moviegoers, the Venice festival was the first major international movie competition to go ahead after others around the world, including its main rival, the Cannes Film Festival, were canceled.

Festival director Alberto Barbera called the event “a sort of test” for the film industry, which is slowly regaining its footing, with some production resuming and cinemas reopening, even as coronavirus cases continue to rise in many parts of the world.

In Italy, the festival was also viewed as a sign of hope and normalcy for the first country in Europe to be battered by the global crisis.

Nevertheless, big-budget blockbusters that have premiered in Venice in years past were missing, as was the bevy of Hollywood A-listers, who have fans screaming for autographs on the sidelines of the red carpet.

Instead, the 2020 version was decidedly low-key, with about half the usual number of attendees, fewer films and seating in theaters that was staggered to respect social distancing.

Japan’s Kiyoshi Kurosawa won a Silver Lion for his wartime espionage thriler “Spy No Tsuma” (Wife of a Spy).

Britain’s Vanessa Kirby, best known for the Netflix series “The Crown” won best actress for “Pieces of a Woman” by Kornel Mundruczo about a home birth that goes wrong.

A special award for young talent was awarded to Rouhollah Zamani from Majid Majidi’s “Khorshid” (Sun Children), about child workers in Iran. Zamani, a street child cast as the 12-year-old lead, was unable to attend the festival after testing positive for the coronavirus.

Last year, “Joker” by US director Todd Phillips took home the Golden Lion and in a controversial choice Roman Polanski won the runner-up Grand Jury prize for “An Officer and a Spy.”