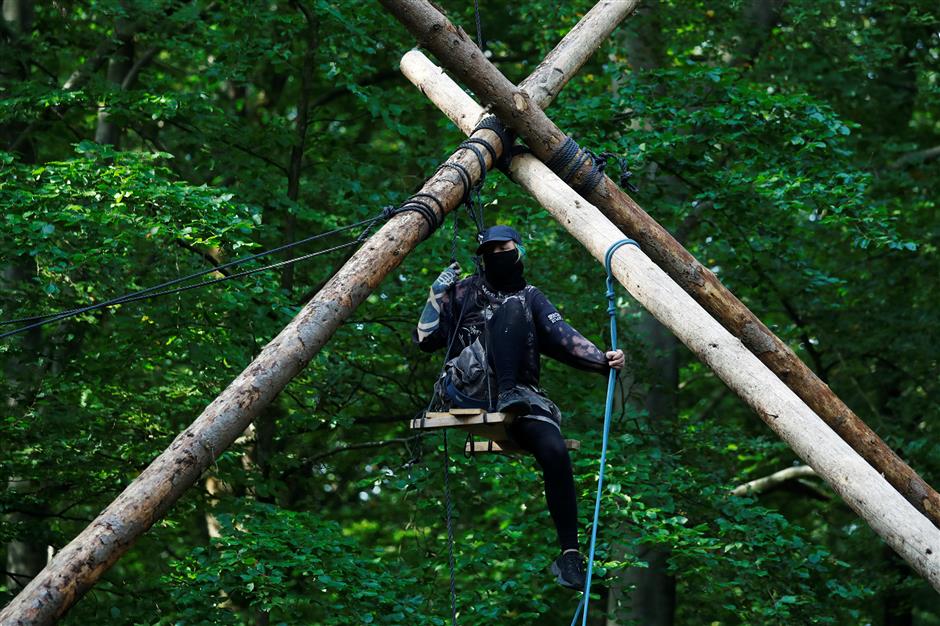 A protester stages a blockade as the police and forest workers clear a camp at the Dannenrod forest during a protest of environmentalists against the extension of the highway Autobahn 49, in Dannenrod, on Wednesday.

The world has lost nearly 100 million hectares of forests in two decades, marking a steady but slower decline, the UN says.

The proportion of forest fell from 31.9 percent in 2000 to 31.2 percent in 2020, now some 4.1 billion hectares, according to the Food and Agriculture Organization.

It marks “a net loss of almost 100 million hectares of the world’s forests,” the FAO said.

Deforestation has hit particularly hard sub-Saharan Africa and Southeast Asia, where it has accelerated in the last decade, but also Latin and Central America, where it has nonetheless slowed down.

Forests are being cut down mainly to make way for crops or farm animals, especially in less developed countries.

In Southeast Asia, forest now covers 47.8 percent of the land compared with 49 percent in 2015. In sub-Saharan Africa, it covers 27.8 percent compared to 28.7 percent five years ago.

A country strongly focused on agriculture like the Ivory Coast has seen forests reduced to 8.9 percent of the total land area from 10.7 percent in 2015. Kenya, Mali and Rwanda have largely held firm against forest loss.

In Latin and Central America, forest covers only 46.7 percent of the total land, compared with 47.4 percent five years ago.