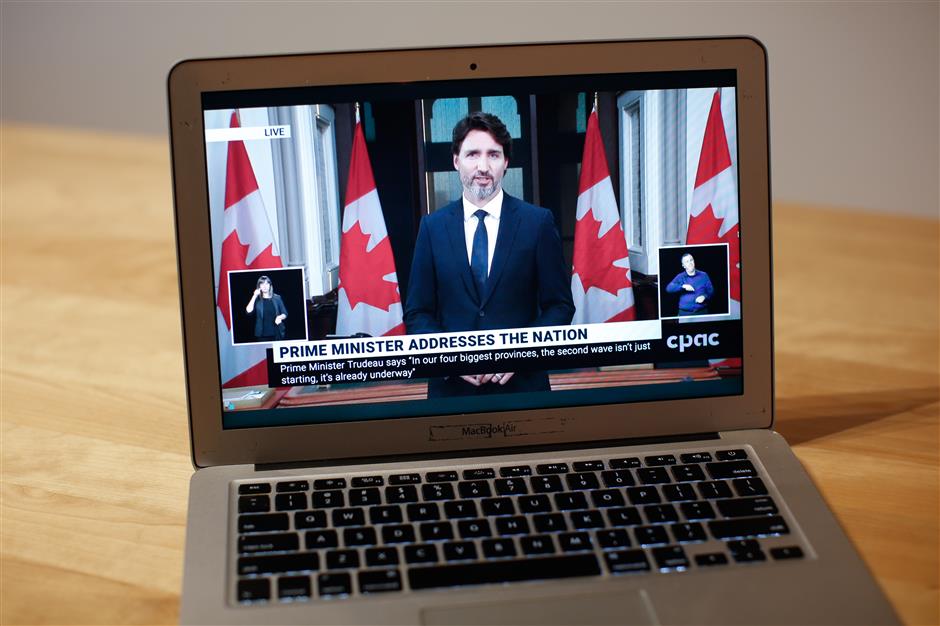 Canadian Prime Minister Justin Trudeau said on Wednesday evening that the second wave of COVID-19 epidemic has already begun in the country amid concerns over a possible national lockdown.

"In our four biggest provinces (British Columbia, Alberta, Ontario and Quebec), the second wave isn't just starting, it's already underway. We're on the brink of a fall that could be much worse than the spring," said Trudeau in his evening address to the nation.

COVID-19 cases have jumped nationally in Canada, from about 300 cases per day in mid-August to 1,248 on Tuesday, prompting the Trudeau government to implore Canadians and public health policy-makers to redouble infection prevention efforts now or face a "very sharp and intense peak" in new COVID-19 cases that would likely lead to a return of national lockdowns.

"I know this isn't the news that any of us wanted to hear. And we can't change today's numbers or even tomorrow's — those were already decided by what we did or didn't do, two weeks ago. But what we can change is where we are in October, and into the winter," Trudeau said.

"It's all too likely we won't be gathering for Thanksgiving, but we still have a shot at Christmas," he said.

Trudeau said that while the outlook is grim, Canada has the tools it needs to blunt the impact of a pandemic that has already infected over 145,000 people and claimed the lives of about 9,200 in this country.

"We have the power to get this second wave under control. I know we can do it because we've already done it once before. In the spring, we all did our part by staying home. And this fall, we have even more tools in the toolbox," he said.

Trudeau urged Canadians once again to wear masks in public, get the flu shot this fall, and download the government's COVID Alert app that notifies users when they have come into contact with someone who has tested positive for the virus.

"This is the time for all of us as Canadians, to do our part for our country, as the government does its part for you," he said.

Trudeau also said his government has signed billions of dollars worth of agreements to buy vaccines, therapeutics, and personal protective equipment. Canada faced critical shortages of gloves, masks and gowns in the early days of the pandemic.

Trudeau's national remarks came just several hours after Canadian Governor General Julie Payette delivered the government's speech in the Senate in which the ruling Liberal Party promised to keep financially supporting Canadians through what's shaping up to be a fall resurgence of the virus.

In the speech, the government pledged to create 1 million new jobs, extend the wage subsidy program until next summer, launch the largest jobs training program in the country's history and begin to build a national child-care program to support working women.

"The economic impact of COVID-19 on Canadians has already been worse than the 2008 financial crisis. These consequences will not be short-lived. This is not the time for austerity. Canada entered this crisis in the best fiscal position of its peers and the government is using that fiscal firepower," Payette said.