Trump to stay at military hospital for next few days: White House 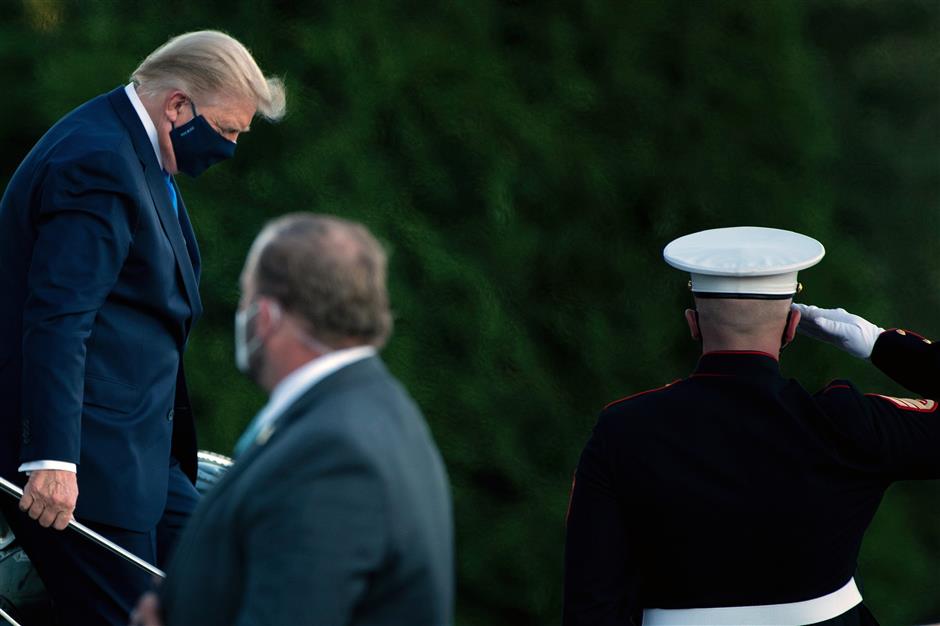 US President Donald Trump walks off Marine One while arriving at Walter Reed Medical Center in Bethesda, Maryland, on October 2, 2020, after testing positive for COVID-19.

US President Donald Trump will stay at a military hospital for the next few days after testing positive for COVID-19, the White House said on Friday.

In a statement, White House press secretary Kayleigh McEnany said Trump, who has mild symptoms, remains in good spirits and has been working throughout the day.

"Out of an abundance of caution, and at the recommendation of his physician and medical experts, the president will be working from the presidential offices at Walter Reed for the next few days," McEnany said, referring to a military hospital in Bethesda, Maryland.

"President Trump appreciates the outpouring of support for both he and the first lady," the press secretary added.

White House communications aide Alyssa Farah told CNN that Trump has not transferred his power temporarily to Vice President Mike Pence under the 25th amendment of the US Constitution.

"The president is in charge," she said.

Trump announced on early Friday morning that he and his wife, Melania, had tested positive for COVID-19 shortly after confirming a close aide to him had contracted the virus.

"As a precautionary measure he received a single 8-gram dose of Regeneron's polyclonal antibody cocktail. He completed the infusion without incident," Conley wrote. "In addition to the polyclonal antibodies, the president has been taking zinc, vitamin D, famotidine, melatonin and a daily aspirin."

The doctor added the first lady "remains well with only a mild cough and headache" and that the remainder of the first family are well and tested negative for COVID-19 on Friday.

Pence, other members of Trump's Cabinet, and several of his senior advisers have taken COVID-19 tests and the results were negative.

"This cannot be a partisan moment," Biden tweeted on Friday afternoon. "We have to come together as a nation."