Trump returns to Oval Office, while recuperating from COVID-19 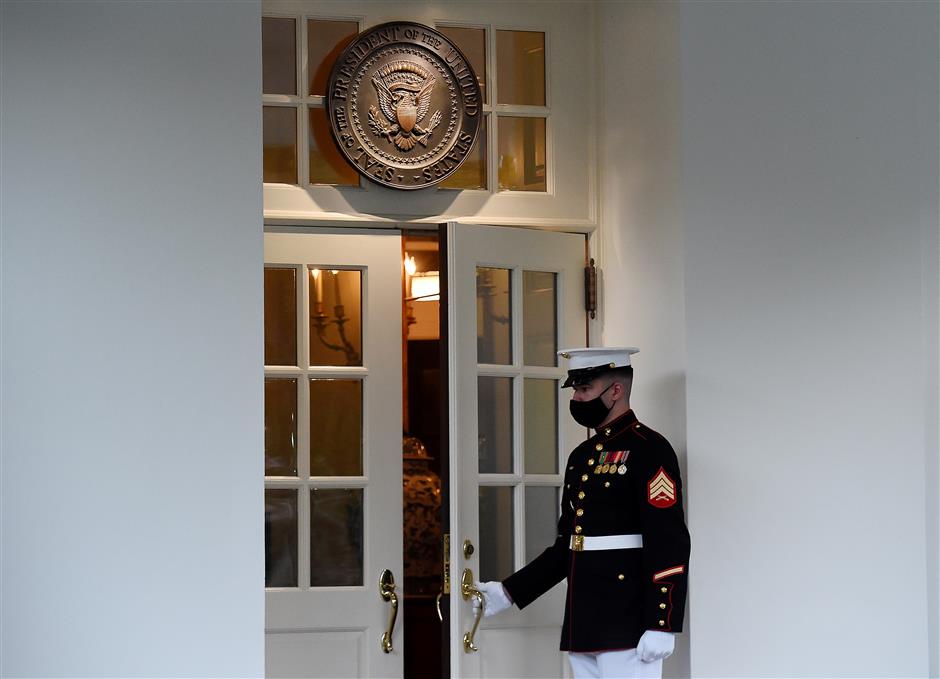 A US Marine wearing a facemask stands guard outside the West Wing, indicating that US President Donald Trump is in the Oval Office at the White House in Washington, DC, October 7, 2020.

US President Donald Trump returned to the Oval Office at the White House on Wednesday while still recuperating from COVID-19.

Trump was briefed on economic stimulus talks and Hurricane Delta, a potentially devastating storm heading toward the Gulf Coast, according to White House spokesman Brian Morgenstern.

The president later tweeted himself that he had spoken to governors of Texas and Louisiana on the hurricane, which is expected to hit the southern coastal region later this week.

"Please heed the directions of your State and Local Officials," he wrote. "We are working with them very closely — please be prepared, be careful, and be safe!"

That was Trump's first appearance in the Oval Office since he returned to the White House on Monday following a three-day hospitalization after testing positive for COVID-19 last week.

White House physician Sean Conley said on Wednesday that the president's "physical exam and vital signs, including oxygen saturation and respiratory rate, all remain stable and in normal range."

"He's now been fever-free for more than 4 days, symptom-free for over 24 hours, and has not needed nor received any supplemental oxygen since initial hospitalization," Conley disclosed, adding that Trump's lab results from Monday "demonstrated detectable levels" of COVID-19 antibodies.

In a video recorded from the White House and posted on Twitter in the evening, Trump touted the therapeutic and medical treatment that he has been receiving and called his infection of the virus, which has infected more than 7.5 million people and killed some 211,000 in the United States, "a blessing in disguise."

Responding to the remarks, 2020 Democratic presidential nominee Joe Biden told reporters in Wilmington, Delaware, that he hopes Trump stays healthy but the former US vice president again criticized his Republican opponent's attitude toward the disease.

"I think it's a tragedy the president deals with COVID like it is something not to be worried about when already 210,000 people have died," Biden added.