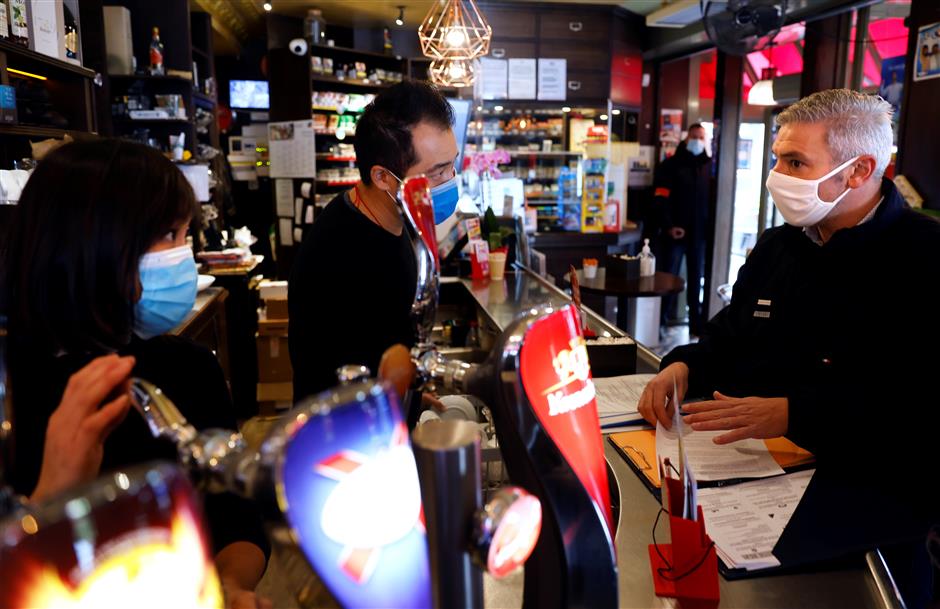 A police officer delivers a ticket to a restaurant owner in Paris on October 6, 2020, during a patrol to inspect the implementation of new sanitary measures aimed at curbing the spread of the COVID-19 outbreak in the French capital.

"The epidemic continues to increase. The virus continues to circulate rapidly for several weeks," Macron said in a televised interview.

"In places where the virus is circulating too quickly, notably among the elderly, and where we see more and more beds in emergencies occupied (by COVID-19 patients), we must move towards more restrictions as we did in the Bouches-du-Rhone and Paris and its inner suburbs," he added.

"We have to be responsible for each other. We have to take care of our elders, our caregivers who are under very heavy pressure," said the president.

Health Minister Olivier Veran would unveil the new package of measures on Thursday, he added.

Early this week, Paris and three surrounding departments were placed on maximum alert with extra measures, including closure of bars, pools and gyms. Entertainment facilities including circus, dance clubs, trade shows are banned.

Restaurants, cinemas and museums may stay open provided that they strictly comply with the health protocol. The limit on attendance to public events is cut from 5,000 to 1,000 people while gatherings of more than 10 people are prohibited in public spaces such as beaches and parks.

Same rules have already been implemented in the Bouches-du-Rhone area around Marseille since September 28.

On Wednesday, France reported 18,746 new confirmed cases of COVID-19. The previous one-day record of 16,972 new cases was registered on October 3. Some 4,625 patients were hospitalized over the last seven days, including 919 in intensive care units.

As the world is in the midst of the COVID-19 pandemic, countries across the globe — including France, China, Russia, the United Kingdom and the United States — are racing to find a vaccine.

As of October 2, there were 193 COVID-19 candidate vaccines being developed worldwide, and 42 of them were in clinical trials, according to the World Health Organization.