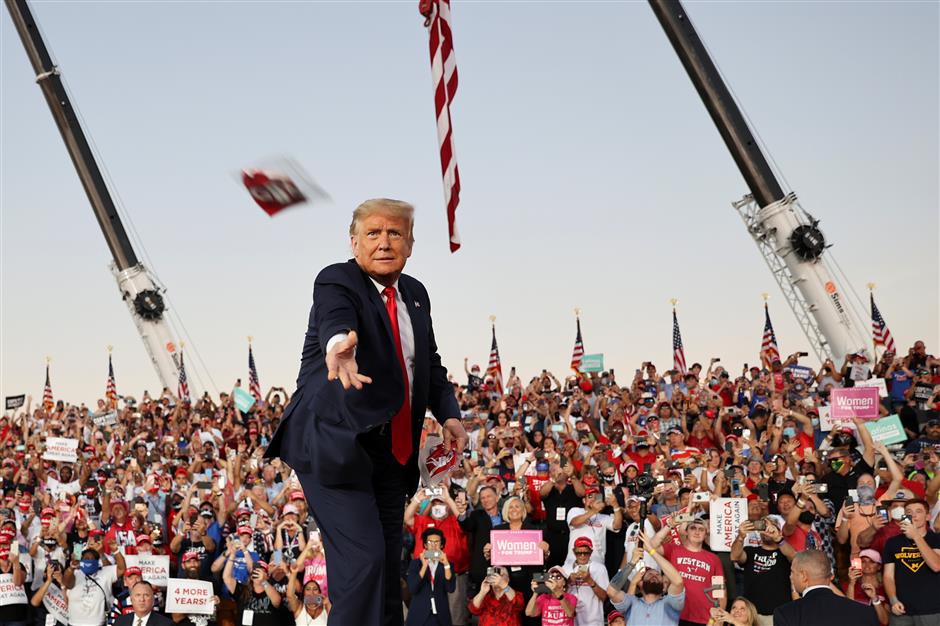 US President Donald Trump throws a face mask from the stage during a campaign rally, his first since being treated for the novel coronavirus disease, at Orlando Sanford International Airport in Sanford, Florida, on October 12.

US President Donald Trump returned to the campaign trail in Florida on Monday for the first time since he announced his COVID-19 diagnosis, appearing at an outdoor rally without a protective mask and touting his management of the novel coronavirus pandemic.

Trump tossed out masks to the crowd as he entered the airport rally in Sanford and repeatedly talked about his recovery from COVID-19.

"I went through it now. They say I'm immune. I feel so powerful," Trump told thousands of supporters standing shoulder to shoulder, most without protective masks. "I'll kiss the guys and the beautiful women. I'll just give you a big fat kiss."

Trump's return to his signature campaign rallies kicked off a three-week sprint to Election Day, as new polls showed him losing more ground to Democratic rival Joe Biden in two battleground states that could decide the November 3 contest.

The rally, the first of four planned for this week, showed that Trump had not reshaped his campaign approach since contracting the virus. "If you want to get out there, get out," he told the crowd.

Critics have faulted Trump for failing to encourage supporters at campaign events, and even White House staff, to wear protective masks and abide by social-distancing guidelines.

At least 11 close Trump aides have tested positive for the coronavirus, which has infected more than 7.8 million people in the United States, killed more than 214,000 and put millions out of work.

The rally came hours after the White House said Trump had tested negative for COVID-19 on consecutive days and was not infectious to others. They were the president's first negative COVID-19 tests announced by the White House since Trump said on October 2 that he contracted the virus.

In a memo, Dr Sean Conley did not say when the tests were conducted but that they and other clinical and laboratory data "indicate a lack of detectable viral replication."

Biden also tested negative for COVID-19 on Monday, his campaign said in a statement. The former vice president has tested negative a number of times since Trump announced his positive test.

But Trump's own illness has put the spotlight squarely on his coronavirus response during the closing stretch of the race, with Biden scaling up his attacks and reaching into states that normally lean Republican.

On Monday, Biden made two campaign appearances in Ohio, where he was once considered a long shot but polls now show a tight race. Speaking in Cincinnati, he criticized Trump for playing down the coronavirus threat and mocked the president's statements that he did not want to panic Americans about the threat.

"Trump is the one who panicked. His reckless personal conduct since his diagnosis, as well, has been unconscionable. And the longer Donald Trump is president, the more reckless he gets," Biden said.

At an earlier event in Toledo, Biden told unionized auto workers that he and former President Barack Obama played a key role in keeping the US auto industry afloat during the financial crisis and recession more than a decade ago.

It was Biden's second campaign trip in as many weeks to Ohio. Trump won the state by 8 percentage points four years ago and almost certainly must carry it again to win reelection. No Republican has won the White House without carrying Ohio.

Biden pulled further ahead in Wisconsin and Pennsylvania, building momentum in two states that Trump carried in the 2016 presidential election, Reuters/Ipsos opinion polls showed on Monday.

Most recent polls in Florida, where a Trump loss would dramatically narrow his path to reelection, showed Biden with a small lead and ahead with key demographic groups in the state, particularly seniors. Trump won Florida in 2016 by just 1.2 percentage points.