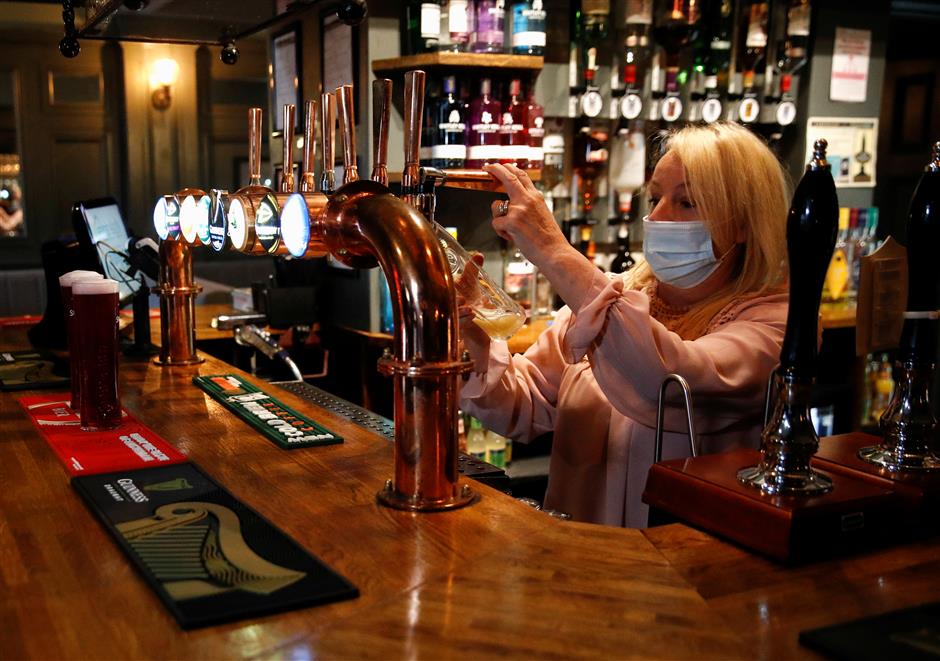 A woman in mask works behind a bar at the Grapes pub in the northwestern English city of Liverpool which has been declared the hotspot during a resurgent COVID-19 outbreak.

The last pints could be pulled in some pubs across northern England this week as furious bosses warn the latest COVID-19 restrictions will wipe out their businesses, which are already reeling from a national lockdown earlier this year.

Northwestern Liverpool, birthplace of the Beatles, will be the first city to be placed in the highest alert tier along with the surrounding area, meaning pubs face closure from today.

Pub managers there reacted with disbelief and anger.

“My biggest worry as a boss and a licensee is my business will have to close again and we may very well not come open next time because there’s no funds in the pot from last time,” said Frances Burleigh, landlady of The Beehive pub in the city center.

The infection rate in northwest England has been soaring in recent weeks, and in Liverpool stands at just under 600 cases per 100,000 people. Health chiefs say action is vital now to prevent hospitals being overrun and a rise in deaths.

While local leaders say they support lockdown measures, they have demanded that the government pump more money into helping the hospitality industry and others affected by the forced closures, arguing that measures announced by Finance Minister Rishi Sunak last week did not go far enough.

Sunak said the government would pay up to two-thirds of employees’ salaries, capped at 2,100 pounds a month each, if they worked for companies that are forced to close temporarily.

Karen Strickland, landlady of The Grapes pub, said income was already down by 70 percent with the current enforced nationwide closing time of 10pm.

“It’s absolutely horrendous. My staff, some of them still haven’t come back to work yet, their job’s just not here for them,” she said.