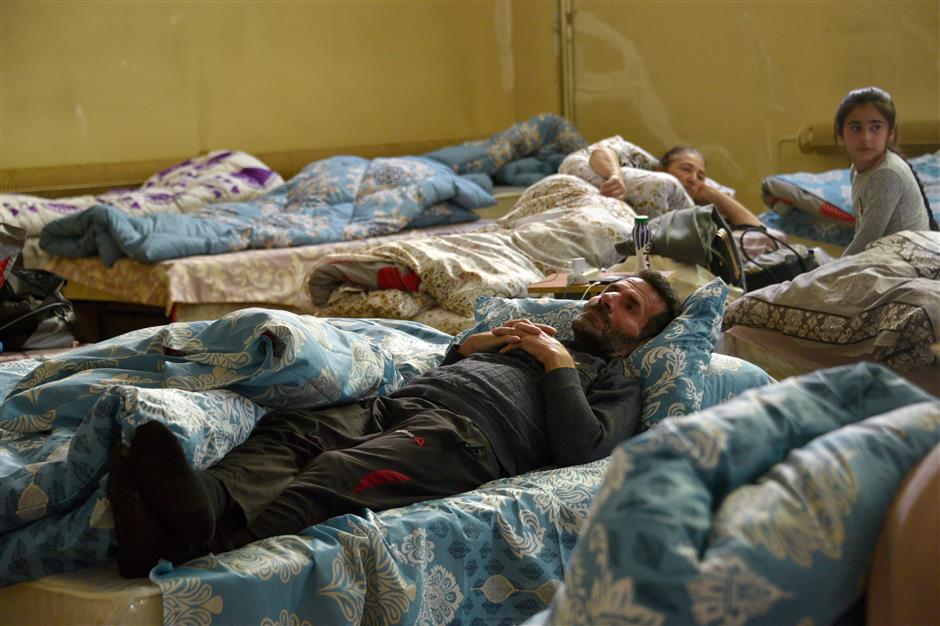 Refugees from the breakaway region of Nagorno-Karabakh rest at a shelter in the Armenian capital, Yerevan.

Death and injury tolls rose on Tuesday as fighting between Armenian and Azerbaijani forces raged for a third week over the separatist territory of Nagorno-Karabakh.

Nagorno-Karabakh military officials said 16 servicemen were killed, bringing the total number of dead among troops to 532 since September 27, when the latest outburst of fighting flared up in the decades-old conflict.

Azerbaijan hasn’t disclosed its military losses, and the overall toll is likely to be much higher with both sides regularly claiming to have inflicted significant military casualties.

Authorities said 42 civilians have been killed on their side since the start of the fighting. Nagorno-Karabakh human rights ombudsman Artak Beglaryan on Monday reported at least 31 civilian deaths in the breakaway region in the past two weeks. Hundreds have been wounded.

The fighting has taken a severe toll on residents of Nagorno-Karabakh. In Stepanakert, the capital of the separatist territory that came under intense shelling last week, people huddled in the basements of apartment buildings or other shelters, fearing new attacks.

“We never shoot their temples or ambulances, while they shoot ours. How can we be with them without a cease-fire,” said Artak, a resident who did not give his last name.

The OTR-21 Tochka mobile systems were in areas of Armenia bordering the Kalbajar district of Azerbaijan that is under separatist control, it said.

Launchers at the first site were aiming at the Azerbaijani cities of Ganja, Mingachevir and other populated areas, it said.

Armenian defense ministry spokeswoman Shushan Stepanyan confirmed that military positions in the area had been hit.

But she denied that Armenian forces had ever fired “a single missile, shell or projectile” inside Azerbaijan.