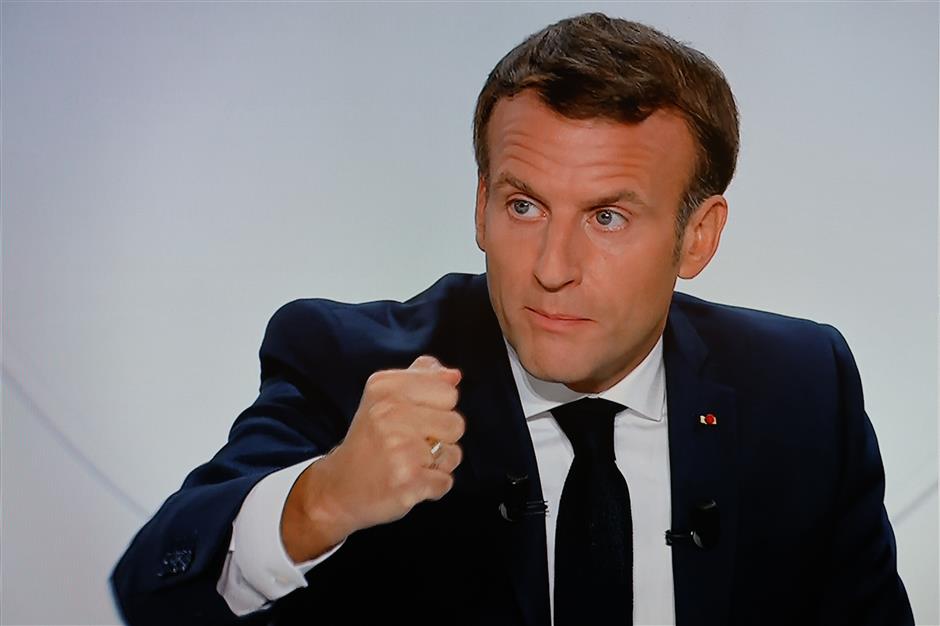 This picture shows a screen displaying French President Emmanuel Macron as he addresses the nation during a televised interview from the Elysee Palace concerning the situation of the novel coronavirus in France, in Paris on October 14, 2020.

A curfew from 9pm to 6am will be implemented in the great Paris region and eight big cities in France starting from Friday midnight and last for at least four weeks to stem the spread of coronavirus, President Emmanuel Macron announced on Wednesday evening.

France has been in a second wave of the coronavirus epidemic with an average of 20,000 new infection cases per day. "We have now entered a phase to which we must react...The virus is everywhere in France," Macron added.

The situation is worrying and the curfew is a "pertinent" measure while having the whole country locked down again would be "disproportionate", he explained.

"We have not lost control. We are in a situation which is worrying and which justifies that we are neither inactive nor in panic. We have learned from the first wave," Macron said.

The curfew does not ban driving between 9pm to 6am, but travel will be strictly limited unless with good reasons. "We must continue to be able to go to work in all sectors," said Macron. "For those who have emergencies, health for example, there will be authorizations."

Prime Minister Jean Castex will give a press conference on Thursday to unveil details of these measures, Macron added.