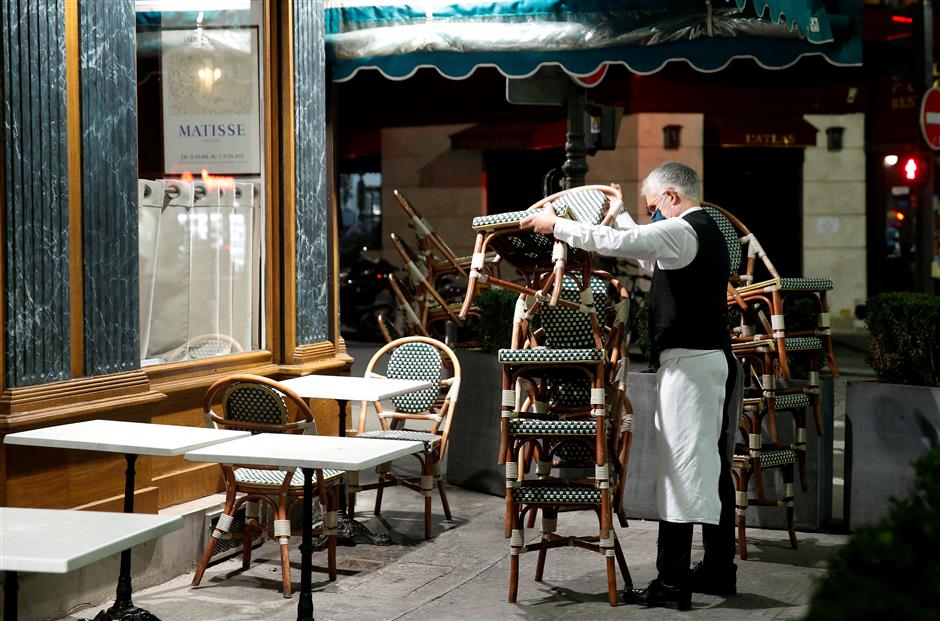 A restaurant in Paris closes on Wednesday night. French President Emmanuel Macron ordered a third of France’s population be put under nightly curfew to tackle a surging second wave.

New coronavirus infections have surged across Europe over recent weeks as the fall kicks in, prompting authorities in many places to start reimposing restrictions relaxed over the summer. The Czech Republic, Belgium, the Netherlands, Spain, France and Britain are among countries causing particular concern.

The head of the World Health Organization’s Europe office urged countries to be “uncompromising” in controlling the virus.

In France, President Emmanuel Macron announced on Wednesday night that 18 million residents in nine regions, including Paris, will have a 9pm-6am curfew starting Saturday until December 1.

Aurelien Rousseau, director of the Paris region’s public health agency, said that nearly half of intensive care beds are now occupied by coronavirus patients, with other hospital beds filling rapidly too.

“It’s a kind of spring tide that affects everybody simultaneously,” Rousseau said. “We had a blind spot in our tracking policies. It was the private sphere, festive events.”

British Health Secretary Matt Hancock on Thursday said London, as well as the adjacent, heavily populated county of Essex, would be put on “high” alert level, up from “medium,” from midnight Friday.

“I must warn Londoners: We’ve got a difficult winter ahead,” London Mayor Sadiq Khan said.

In the capital, whose financial district is rivaled only by New York, 11 boroughs are seeing more than 100 new cases a week per 100,000 people. The worst hit areas are Richmond, Hackney, the City of London, Ealing, Redbridge and Harrow.

While Germany, the European Union’s most populous nation, is still in comparatively good shape, alarm bells are ringing there too. On Thursday, the national disease control center reported 6,638 cases over 24 hours — exceeding the previous record of nearly 6,300 set in late March, although testing in the country of 83 million has expanded greatly since then.

Chancellor Angela Merkel and Germany’s 16 state governors agreed on Wednesday night to tighten mask-wearing rules, make bars close early and limit the number of people who can gather in areas where coronavirus infection rates are high. Merkel, who stressed the importance of keeping contact-tracing efforts on track, said: “We must stop this exponential rise, the quicker the better.”