Trump says pandemic over, Biden says he did 'nothing' 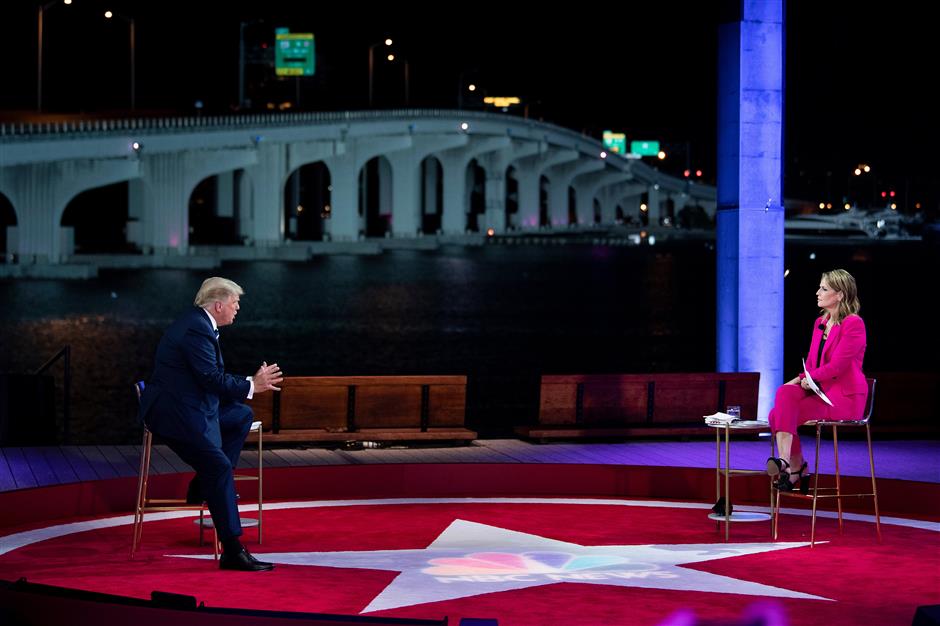 US President Donald Trump gestures as he speaks during an NBC News town hall event moderated by Savannah Guthrie at the Perez Art Museum in Miami on October 15.

President Donald Trump gave a combative, at times agitated defense of his handling of the novel coronavirus pandemic on Thursday while his election challenger Joe Biden, appearing in a simultaneous television town hall on another network, accused him of having done "nothing."

"We're rounding the corner," Trump said with his usual optimism, even as swaths of the United States see sharply rising caseloads.

But pressed by the host of the NBC town hall in Miami, he became quickly frustrated, especially when he was asked about his lukewarm denunciations of extremist right wing groups in the United States.

He refused to denounce QAnon, a conspiracy theory movement that believes Trump is fighting a "deep state" linked to a mysterious global elite running the world's governments, while also trafficking in child sex.

Trump said "I know nothing about QAnon," and then continued to say that he liked the shadowy group's position being "very much against pedophilia."

The Democrat, who is holding a steady lead in the polls ahead of the November 3 election, aimed fire immediately on Trump's coronavirus record, accusing him of having failed the country.

"We're in a situation where we have 210,000-plus people dead and what's he doing? Nothing. He's still not wearing masks," Biden said.

Originally, both candidates had been meant to meet on Thursday for what would have been their second of three presidential debates.

The first debate, which took place in Philadelphia, was a brutal affair in which Trump repeatedly talked over the top of Biden and the Democrat told him to "shut up." The follow-up, however, was scrapped after organizers switched to a virtual format, citing Trump's coronavirus infection, and the president refused to accept the arrangement.

Trump, who says he is clear of COVID-19 and got back on the campaign trail on Monday, has rallies booked around the country for every night this week.

The coronavirus pandemic, which has killed 217,000 Americans, continued to disrupt the already tense presidential election.

Following Trump's temporary time out from the campaign while he recovered last week, Biden's vice presidential running mate Kamala Harris has now put her own travel on hold after her communications director tested positive.

Harris did not need to quarantine, O'Malley Dillon added, but "out of an abundance of caution" would cancel travel and campaign virtually before hitting the road again on October 19.

Both individuals flew with Harris on October 8. The campaign said they wore masks and were not within 2 meters of Harris for more than 15 minutes.

"I wasn't in close contact — as defined by the CDC — with either during the two days prior to their positive tests," tweeted Harris, a 55-year-old US senator. "I've had two negative tests this week & am not showing symptoms."

The campaign said that yet another person who tested positive had traveled on Biden's plane this week but had been so far away that the candidate was in no danger and doctors said "there is no need" for him to quarantine.