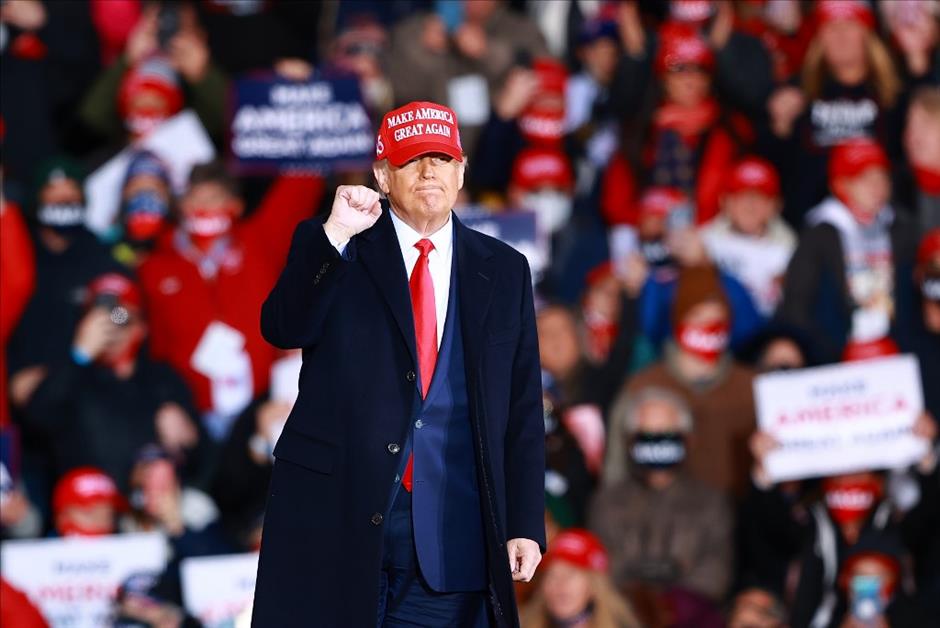 US President Donald Trump gestures during a campaign rally on October 17, 2020 in Muskegon, Michigan. President Trump has ramped up his schedule of public events as he continues to campaign against Democratic presidential nominee Joe Biden ahead of the November election.

President Donald Trump campaigned at a frenetic pace Saturday in a three-state trip that started with a Michigan rally where he called opponent Joe Biden a "criminal" and pounded his claim that the Democrats are anti-American.

Addressing a rally in Muskegon, Michigan, Trump focused on US culture war themes, telling a large cheering crowd that the Democrats wanted to "erase American history, purge American values and destroy the American way of life."

And he ramped up his increasingly intense attempt to paint Biden as corrupt, pushing the same conspiracy theory that led to his impeachment last year and a new, murky report in the New York Post that purports to reveal evidence of corruption by Biden's son Hunter.

"Joe Biden is a corrupt politician and the Biden family is a criminal enterprise," Trump said to more cheers.

Trump — who was impeached for allegedly abusing his office in an attempt to find dirt on Biden, and later acquitted — had the campaign trail all to himself just 17 days before the election.

He flew on to Wisconsin, a state in the bull's eye of a resurgent US coronavirus spread, where he told jubilant supporters in Janesville: "I did this for us, not for me, believe me."

Trump was ending the day in Las Vegas, Nevada, and will hold another rally in Carson City on Sunday.

"President Trump's strategy is to work for the vote of the American people," his spokeswoman Kayleigh McEnany said on Fox News.

"It's why he'll be in two states today, he'll have two rallies tomorrow, two more in Arizona on Monday, and he's going all in."

Biden, who has run a strikingly low-key campaign yet leads in strings of polls, stayed home in Delaware with no public events. He was due to campaign in North Carolina on Sunday.

The Republican incumbent, who only got out of the hospital two weeks ago after falling ill with COVID-19, is planning to keep up the pace throughout the final stretch of the campaign, with almost daily rallies, in hope that his hardcore base will turn out in huge numbers.

The enthusiasm was evident on Saturday. The crowd shouted "we love you" and, with Trump's encouragement, chanted "lock her up" in reference to Michigan's Democratic governor — the recent target of a right-wing kidnap plot.

Closing after 90 minutes, Trump remained on stage briefly to dance to the sounds of Village People's "YMCA."

Conspicuously absent in his stump speech is any real discussion of the coronavirus, which has killed nearly 219,000 Americans, with more than eight million infected, and is spreading again at rates not seen for months.

Polls show that an overwhelming majority does not approve of Trump's erratic handling of the pandemic. This has veered from the record-speed push for a vaccine to the president's constant claims that the coronavirus poses little risk and his repeated downplaying of the need to wear masks.

Biden has made this record the center of his campaign, promising to bring what he terms more sober, less politicized leadership to the national crisis.

Biden issued a statement Saturday saying that "President Trump is knowingly downplaying the severity of the virus."

"At virtually every turn, he has panicked and tried to wish it away, rather than doing the hard work to get it under control," Biden said.

Can Trump catch up?

Trump likes to say that his packed rallies are evidence of strength not reflected in "fake" election polls. He also points out that in 2016 few believed he could beat the apparently solid frontrunner Hillary Clinton.

But other than barnstorming the country and hoping that his new push to smear Biden will stick, he has little leverage to shift the dynamics of a race that for weeks has shown consistent advantages for the Democrat.

One chance will be the final televised debate between the candidates on Thursday. However, more than 21 million Americans have already cast ballots in unprecedented early voting, meaning that the election is already in the process of being decided.

And while Biden is running a much quieter campaign, there was evidence Saturday of popular energy on the Democratic side when thousands of people protested in Washington and other cities against the rapid Republican confirmation of Trump's latest conservative pick for the Supreme Court, Amy Coney Barrett.

Some Republicans, including Trump ally Senator Ted Cruz, have warned of a major defeat on November 3.

But Biden's campaign manager Jennifer O'Malley Dillon said in a Saturday memo reported by The New York Times that the race is far closer than many realize.

"This race is far closer than some of the punditry we're seeing on Twitter and on TV would suggest," she wrote, the Times reported. "In the key battleground states where this election will be decided, we remain neck and neck with Donald Trump."