California wildfires drive 90,000 from their homes 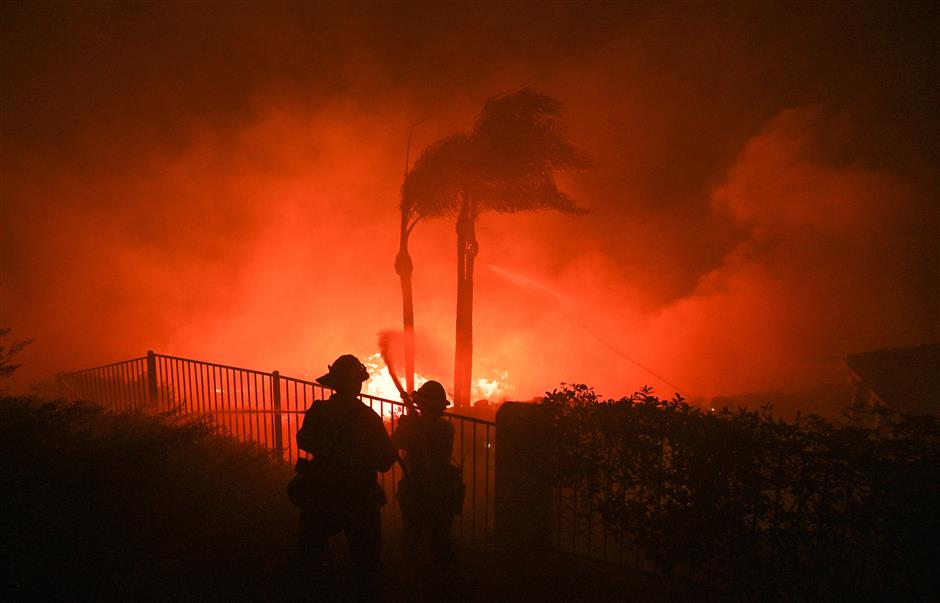 Firefighters try to suppress flames of the Blue Ridge Fire in Yorba Linda, California, on Monday as two fast-spreading and uncontained wildfires raged across more than 5,900 hectares.

More than 90,000 people fled their homes near Los Angeles on Monday as two fast-spreading and uncontained wildfires raged across more than 5,900 hectares, blocking key roadways and critically injuring two firefighters.

The larger Silverado Fire erupted early in the morning in the foothills of Irvine, about 60 kilometers southeast of Los Angeles, and quickly spread, fueled by dry conditions and erratic winds that prevented firefighting aircraft from flying.

“Firefighters continue to battle flames throughout the night on the Silverado Fire. More than 3,200 hectares have burned but we have no reports of structures lost at this time,” Orange County Fire Authority said in a Facebook update on Monday night.

A second fast-growing wildfire in Yorba Linda, about 27 kilometers north of Irvine and dubbed the Blue Ridge Fire, erupted early afternoon on Monday and had already scorched more than 2,640 hectares, also forcing evacuations.

“It’s nuts — even inside the car, my eyes, my nose and my throat stung,” said Frederic Tournadre, a French man whose company in Irvine sent all its employees home.

The Silverado inferno quadrupled in size by afternoon, jumping a highway and covering the area with a huge plume of smoke and ash.

“We have emergency evacuation orders here in the city of Irvine that are impacting approximately 90,800 residents,” Shane Sherwood, a division chief at Orange County Fire Authority, told reporters.

The National Weather Service warned that the combination of low humidity, dry vegetation and strong winds had created “the most dangerous fire weather conditions” this year.

It said the region will remain under a red flag warning — signifying a high risk of wildfire — through last night.

Officials said the two injured firefighters sustained second- and third-degree burns and both had to stay at an area hospital.

“I got an opportunity to talk to members of their families and spend time with both firefighters in the emergency room while they were being treated, but they were not in a position where they could speak with me,” said Orange County Fire Authority chief Brian Fennesy.

He added that winds of 32-64 kilometers per hour, gusting up to 96 kph, had made it extremely difficult for the 500 firefighters trying to control the flames.

“Any time winds are that bad you can’t fly, and that certainly has an impact on both hand crews and bulldozers and firefighters at the end of those hose lines,” he said.

More than 1.6 million hectares have been devoured this year by flames in California.