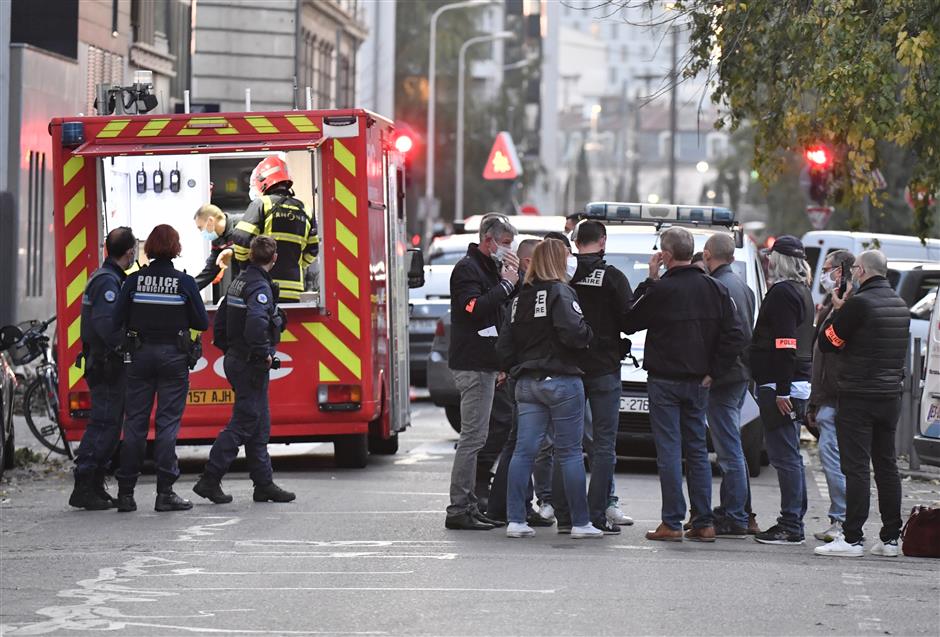 Security and emergency personnel in the French city of Lyon on Saturday are at the site where an attacker armed with a sawn-off shotgun wounded an Orthodox priest before fleeing.

An attacker armed with a sawn-off shotgun seriously wounded a Greek Orthodox priest in a shooting outside a church in the French city of Lyon on Saturday, with the country still reeling from a deadly church attack days before.

Nikolaos Kakavelaki, 52, was closing his Lyon church mid-afternoon when he was attacked and is now in a serious condition in hospital, said a police source who asked not to be named.

The attacker fled the scene but Lyon’s public prosecutor later announced that a suspect had been arrested.

“A person who could correspond to the description given by the initial witnesses has been placed in policy custody,” prosecutor Nicolas Jacquet said, adding that the suspect had not been carrying a weapon when he was arrested.

The priest was shot twice in the chest at point-blank range, according to sources close to the inquiry.

The motive for the attack was not clear.

“At this stage, no hypothesis is being ruled out, nor favored,” Jacquet said.

But it comes at a time when France is already on edge after the killing of three people inside a church in Nice on Thursday and the beheading of a teacher last month who had showed his class a cartoon of the Prophet Muhammad.

The Lyon prosecutor’s office said witnesses, and a passing police patrol, heard gunshots then “saw an individual fleeing and discovered a man with gunshot wounds at the back door of the church.”

Prosecutors said that an investigation had been launched, and it remains “in close contact with the national anti-terrorist prosecution.”

The church is in a residential area of Lyon which was especially quiet due to the new lockdown measures introduced on Friday to stem the growing coronavirus pandemic.

Archbishop Ieronymos, the head of the Greek Orthodox church, denounced a “horror that defies human logic.”

“Intolerant and fanatic extremists, fundamentalists of violence and death use religion as a bullet which aims at the heart of freedom and especially the freedom of belief of others,” he told reporters in Athens.

France was already tense after the republication in early September of cartoons of the Prophet Muhammad by the satirical Charlie Hebdo magazine, which was followed by an attack outside its former offices, the beheading of the teacher and the attack in Nice.

In an apparent bid to reach out to Muslims, Macron gave an interview to Al-Jazeera on Saturday in which he said he understood that caricatures of Muhammad could be shocking.

He also lashed out at “lies” that the French state was behind the caricatures, and said he will “always defend in my country the freedom to speak, to write, to think, to draw.”

French Catholics yesterday celebrated a religious festival under the tightest security as police made two new arrests over the attack on a church in the southern city of Nice blamed on an Islamist knifeman.

The tensions did not prevent Catholics going to church to celebrate the All Saints holiday. Authorities allowed an exemption to the coronavirus lockdown.

“I was apprehensive, I was scared of coming,” said Claudia, 49, as she arrived, reassured by the presence of heavily armed soldiers.