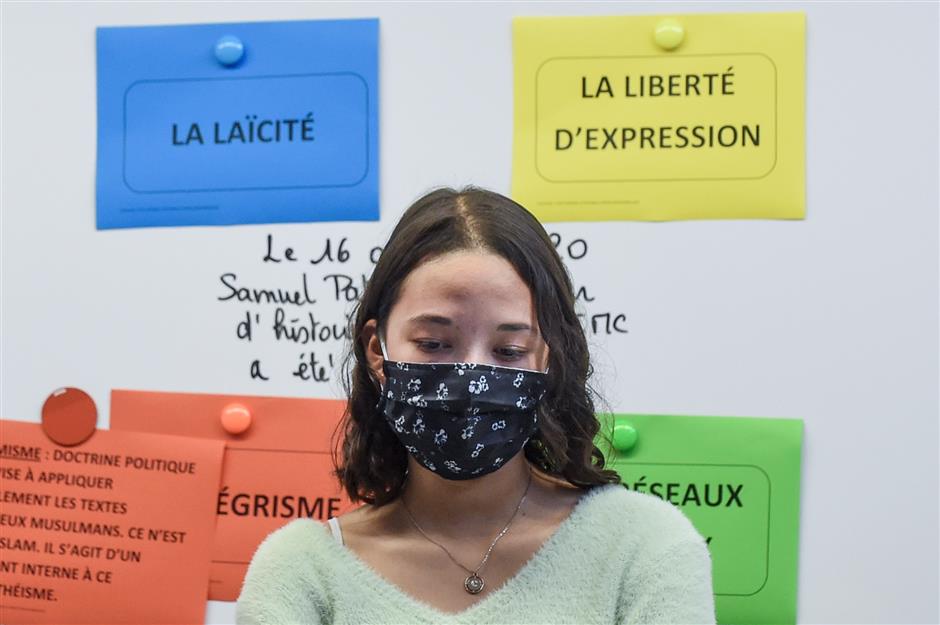 A high school student takes part in a tribute to French teacher Samuel Paty on Monday.

Schools across France held a minute’s silence on Monday in memory of teacher Samuel Paty who was beheaded by a Chechen teenager for showing cartoons mocking the Prophet Muhammad during a class on freedom of expression.

With France at its highest security level following further attacks since Paty’s killing, some 12 million pupils returned to school for the first time since the 47-year-old was slain in broad daylight on the eve of a two-week school holiday.

French President Emmanuel Macron cast the killing as an attack on French values and the Republic itself. But his insistence that France will not compromise on basic freedoms of belief and expression has provoked outcry among Muslims worldwide.

“The idea of terrorism is to create hatred,” Macron wrote in a message to schoolchildren on social media. “We will pull through this together.”

Pupils stood in silence at 11am and teachers reminded them of their rights and duties in a “free democracy.”

Macron has described Paty as a “quiet hero” dedicated to instilling the values of the Republic in his pupils and the embodiment of France’s “desire to break the will of the terrorists.”

Teachers across France read a letter written to their profession by Jean Jaures in which the 19th century politician set out their role in nurturing young citizens.

“They will be citizens and they must know what a free democracy is, what rights confers on them, what duties the sovereignty of the nation imposes on them,” Jaures wrote.

France has deployed extra soldiers to protect places of worship and schools following further attacks since Paty’s killing, including in a church in Nice and against a priest in Lyon.

Paty’s murder convulsed secular France, where the separation of church and state is fiercely defended. It also exposed the fault lines cleaving a country where some Muslims see the government’s use of secular laws as a tool to suppress their religious beliefs.

Macron has enraged Muslims around the globe by describing Islam as “a religion in crisis all over the world” and defending free speech that some deem blasphemous or inflammatory.