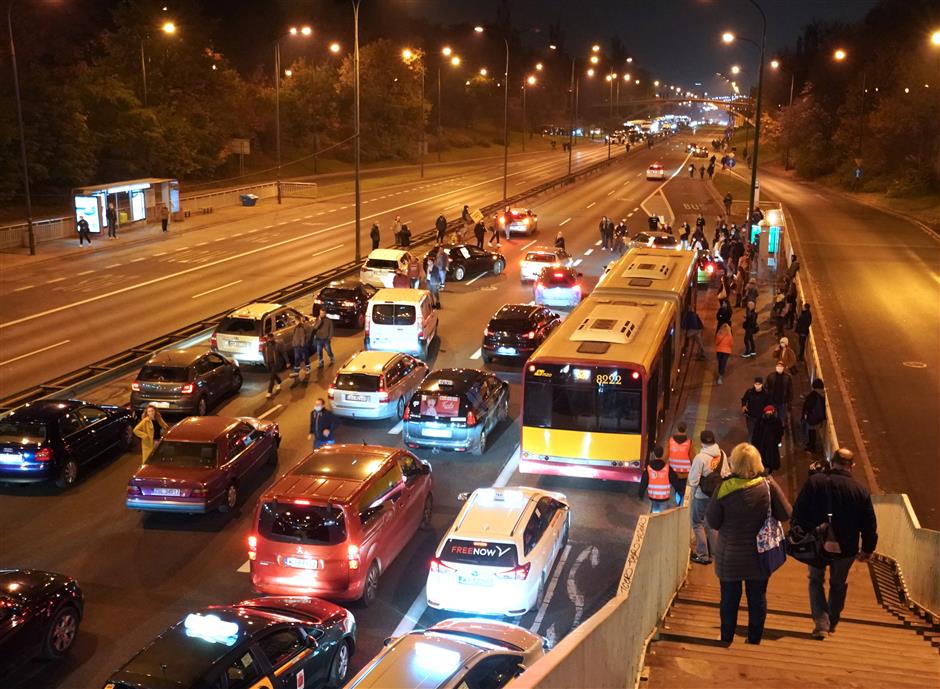 Demonstrators block cars on a street during a demonstration against the tightening of Poland’s already restrictive abortion law on Monday in Warsaw.

Poland’s right-wing government is delaying the publication and implementation of a high court ruling that tightens the abortion law and that has triggered almost two weeks of nationwide protests.

A government official said on Tuesday that the leaders are taking time to debate the contested ruling and find a solution.

“There is a discussion going on, and it would be good to take some time for dialogue and for finding a new position in this situation that is difficult and stirs high emotions,” said Michal Dworczyk, the head of Prime Minister Mateusz Morawiecki’s office.

The constitutional court ruled October 22 that aborting fetuses with congenital defects violates the constitution, in effect further tightening what was already one of Europe’s most restrictive abortion laws.

It would leave only abortions in cases of risk to the woman’s life or crime — meaning rape or incest — allowed under Polish law.

The ruling was scheduled to be formally published on Monday. Unpublished, it has no legal power.

Massive daily anti-government protests have been held by hundreds of thousands of people ever since the ruling. The mostly young protesters have been disregarding the pandemic threat and a ban on public gatherings larger that five people intended to stop the spread of the coronavirus.

Morawiecki has appealed for talks with the protesters and opposition lawmakers to find a solution.

With Poland roiled by the attempt to further restrict abortion, surveys show a large drop in support for the ruling conservative Law ad Justice party and for its leader, deputy prime minister, Jaroslaw Kaczynski.