Biden pledges to be a unifying president, hails 'convincing victory' 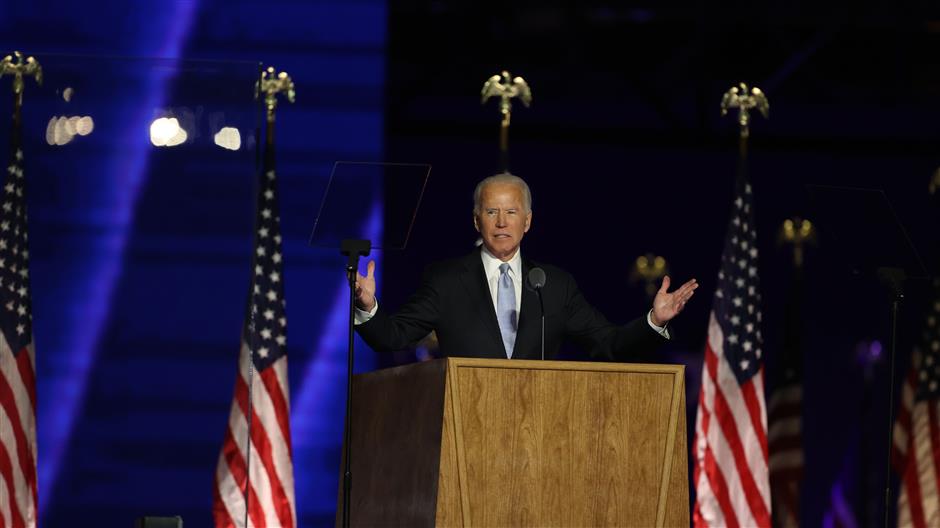 Joe Biden pledged that he's going to be a president who seeks to unify and rebuild the backbone of the U.S. during an address to the public on Saturday night after being projected by multiple U.S. media outlets to be the winner of the 2020 U.S. election.

"I pledge to be a president who seeks not to divide, but to unify. Who doesn't see Red and Blue states, but a United States. And who will work with all my heart to win the confidence of the whole people," Biden told cheering supporters at his hometown Wilmington, Delaware.

He also touted his victory in the tense race by saying, "people have spoken and delivered us a clear victory, a convincing victory," with a record of 74 million votes.

Moving to the topic of COVID-19 which has taken over 236,000 lives in the U.S., Biden said he's resolute to turn the pandemic around and he will name an advisory team to deal with the pandemic on Monday and they'll tackle it based on "science."

"We cannot repair the economy, restore our vitality, or relish life's most precious moments – hugging a grandchild, birthdays, weddings, graduations, all the moments that matter most to us – until we get this virus under control."

Before Biden took on the victory stage, Kamala Harris, who will become U.S.' first Black, Asian American vice president, said voters had brought a "new day for America" and both Biden and she herself are ready to serve the nation.