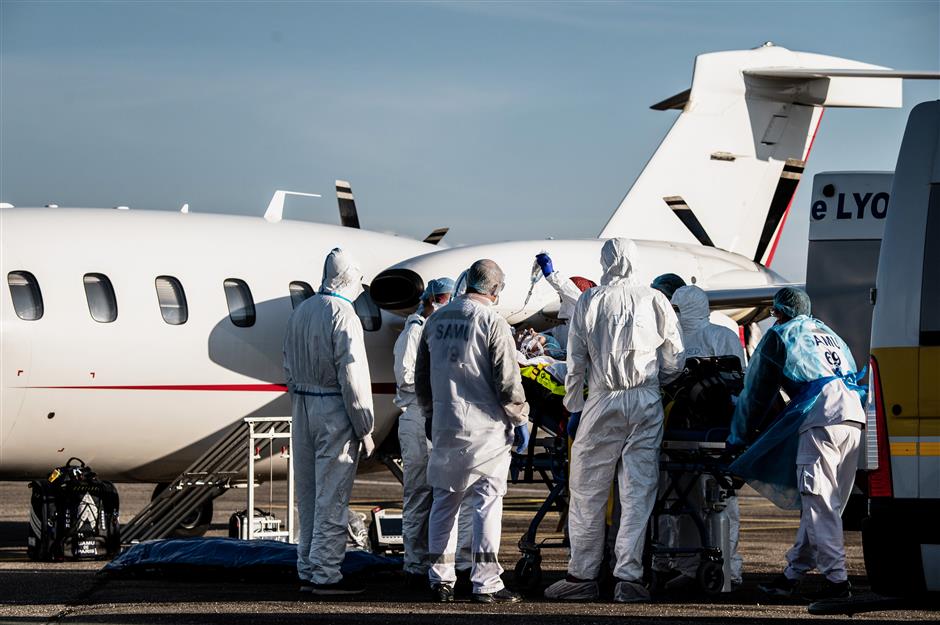 An aeroplane plane waits as members of the medical staff transfer a patient with the novel coronavirus, COVID-19, aboard from Lyon-Bron aerodrome to the French capital Paris on November 9, 2020.

French Director-General of Health Jerome Salomon on Monday warned that the most aggressive phase of the epidemic's second wave "is still ahead of us," even if a slowdown in the virus circulation in cities, where curfews were imposed, offered "signs of hope."

"The peak of the epidemic is ahead of us. The second wave is still progressing, let's continue our efforts and brake it even harder," Salomon said. "We are at a crucial moment."

"The greatest vigilance must be maintained by respecting barrier gestures, reducing contacts and protecting the elderly," he told reporters at a press briefing on the epidemic situation.

The government has introduced new nationwide confinement on October 30 until early December, locking down 67 million inhabitants, who can now go out only to work, buy essential items or for health emergency. All non-essential businesses such as restaurants, cafes, bars, cinemas and gyms are closed.

In mid-October, a ban on night-time movement had been ordered in the great Paris region and eight major cities from 9pm to 6am.

"Wherever measures to curb the epidemic have been implemented, a slowdown has taken place. The cities which have imposed a curfew are starting to see a slower spread of the epidemic. It is encouraging and it encourages us to continue collectively our efforts," Salomon said.

He said that "10 days" are needed to evaluate the impact of the restrictive measures, adding that the number of new cases and admissions to hospitals "will continue to increase several days after restrictions."

Salomon added 31,125 patients were hospitalized, of whom 4,690 are in intensive care units. A total of 83 patients have been evacuated to less- strained hospitals and 200 others will be transferred in the coming two weeks.