Supreme Court inclined to save Obamacare as COVID-19 pandemic widens

The US Supreme Court appeared inclined on Tuesday to reject Trump administration arguments and let stand former President Barack Obama's signature health-care program, ending the threat to the insurance coverage of 20 million people in the midst of the novel coronavirus pandemic.

At least five of the nine justices appeared unreceptive to the lawsuit arguing that the entire Affordable Care Act is unconstitutional because of legal questions over consumer penalties — penalties already neutered by legislation.

Those five included Chief Justice John Roberts and Brett Kavanaugh, conservatives that the opponents to the ACA, or Obamacare, hoped would support their case.

But both indicated that Congress' 2017 decision to reduce to zero the ACA's individual mandate penalty — meant to compel people to buy insurance — left the overall ACA law in place and on firm legal ground.

While the nine justices won't reveal their views before a decision is rendered, likely early next year, the hearing was seen as likely to a major defeat for President Donald Trump and other Republicans seeking to end the popular Democratic program.

Trump pledged to end the ACA when he succeed Obama four years ago. 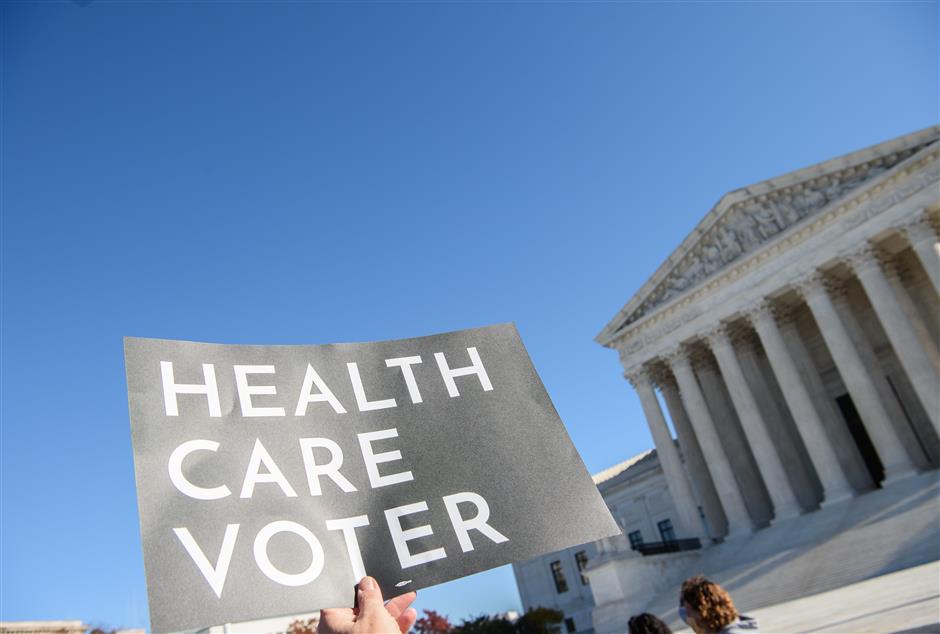 A demonstrator holds a sign in front of the US Supreme Court in Washington, DC, on November 10.

'The plane has not crashed'

The politically charged case threatened to demolish Obama's groundbreaking attempt to extend health insurance to tens of millions of Americans who could not afford it.

Attorneys for the Justice Department and Texas-led states opposed to the ACA argued that the individual mandate — you must have insurance or pay a fine — was illegal and rendered the entire law unconstitutional.

"It's hard for you to argue that Congress intended for the entire act to fall if the mandate were struck down, when the same Congress that lowered the penalty to zero did not even try to repeal the rest of the act," Roberts said during two hours of arguments on the case.

Kavanaugh echoed that, telling the court that the "proper remedy" would be to simply sever the individual mandate from the law.

And while the four other conservative justices of the court — including Amy Coney Barrett, who was named to the court by Trump just last month — raised doubts about the overall law, none seemed deeply hostile to it.

Even Justice Samuel Alito, one of the court's most reliable conservatives, told attorneys that, yes, the individual mandate was once seen as crucial for the ACA, like an aircraft part essential for flight.

But that has changed, he said. "The part has been taken out, and the plane has not crashed," he said.

Greeted with distrust when first proposed, the ACA remains popular, with 20 million users and many more beneficiaries, and neither Republicans in Congress nor Trump have offered alternatives.

Under the ACA, poor adults have access to the Medicare program normally open only to retired people over 65; young people under 26 can be covered by their parents' insurance; and people whose pre-existing medical conditions led to their being denied commercial health insurance have coverage.