Trump defiant, but says of his future: 'who knows' 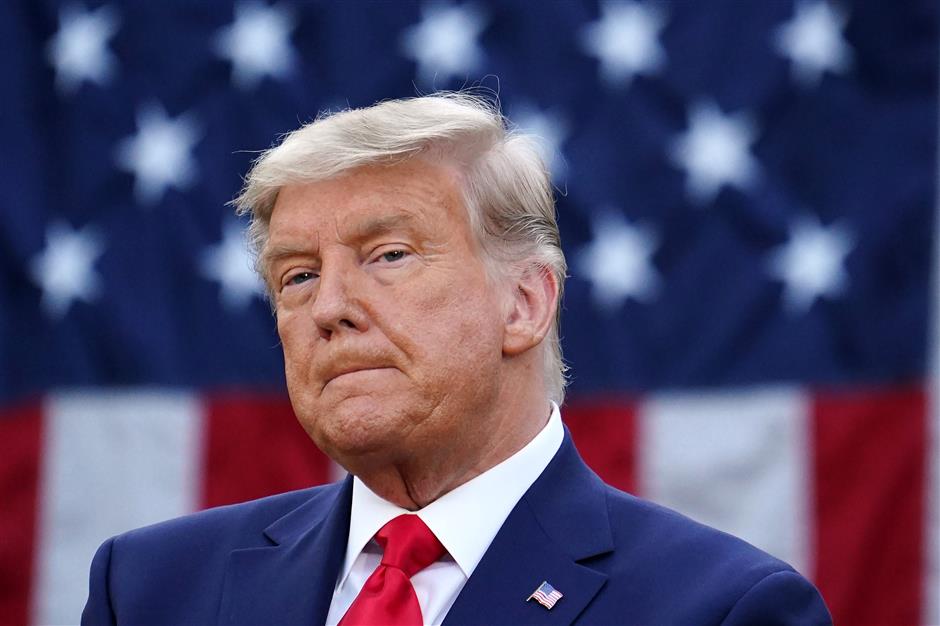 US President Donald Trump looks on after delivering an update on "Operation Warp Speed" in the Rose Garden of the White House in Washington, DC, on November 13, 2020.

Donald Trump said on Friday that "time will tell" if he remains president, in a momentary slip of his unprecedented refusal to concede his election defeat and help Democrat Joe Biden prepare to take power.

Trump broke his silence after a week without on-camera comments, speaking at a Rose Garden event to herald the imminent authorization of a coronavirus vaccine.

During a short speech about the vaccine work, Trump insisted that he would never again call for a lockdown to curb the virus' spread.

Then he added: "Hopefully, the, the whatever happens in the future, who knows which administration it will be, I guess time will tell."

The hint of doubt in Trump's mind came despite him continuing to push a conspiracy theory that mass fraud — for which no evidence exists — robbed him of victory in the November 3 election.

On Friday, Trump tweeted thanks to supporters backing his claim that the "Election was Rigged" and said he might "stop by and say hello" at a rally planned in Washington on Saturday.

Trump continues to block Biden's ability to prepare his transition ahead of inauguration on January 20 and he has filed numerous lawsuits — unsuccessfully — to challenge vote counts around the country.

Trump was speaking just after television networks projected results in the final two undeclared states — Biden winning the former Republican stronghold of Georgia in an extremely close race, and Trump getting North Carolina.

Those last tallies gave Biden a solid overall final win in the state-by-state Electoral College that decides the presidency with 306 votes against Trump's 232.

Throughout the post-election period, Trump has been absent in public at least from normal presidential duties and notably silent about dramatically soaring coronavirus infection rates around the country and steadily rising deaths.

He has only left the White House to play golf twice and to attend a brief Veterans' Day ceremony at Arlington National Cemetery.

Earlier Friday, Trump attended a briefing in the Oval Office on the vaccine search — one of the first times he has had official business on his public schedule since the election.

But Trump did not take questions after his Rose Garden remarks. He hasn't had any sort of press conference since the election and his last public remarks were on November 5, when he falsely claimed to have won.

According to the website factba.se, which keeps track of Trump's pronouncements, this was the longest he'd gone without speaking on camera since he became president.

Despite his own intelligence officials' declaration on Thursday that the election was "the most secure in American history," Trump and his right-wing media allies show no sign of giving up their quest to get the results overturned.

"We are moving forward here at the White House under the assumption that there will be a second Trump term," he said.

Biden, meanwhile, is steadily preparing to take over on January 20 and the list of world leaders accepting that he will be the new president keeps lengthening.

However, Biden's newly appointed chief of staff, Ron Klain, told MSNBC on late Thursday that moves by Trump to block the incoming administration from access to confidential government briefings posed a growing risk.

Klain highlighted the inability to join in on preparations for rolling out the COVID vaccine in "February and March when Joe Biden will be president."

"The sooner we can get our transition experts into meetings with the folks who are planning the vaccination campaign the more seamless," he said.

Top Republicans remain outwardly loyal to Trump, but there appears to be widening discomfort within the party over the blocking of Biden's transition team.

Senator James Lankford told Tulsa Radio KRMG earlier this week that he was giving Trump until the end of the week to allow Biden access to the daily presidential intelligence briefing or "I will step in."