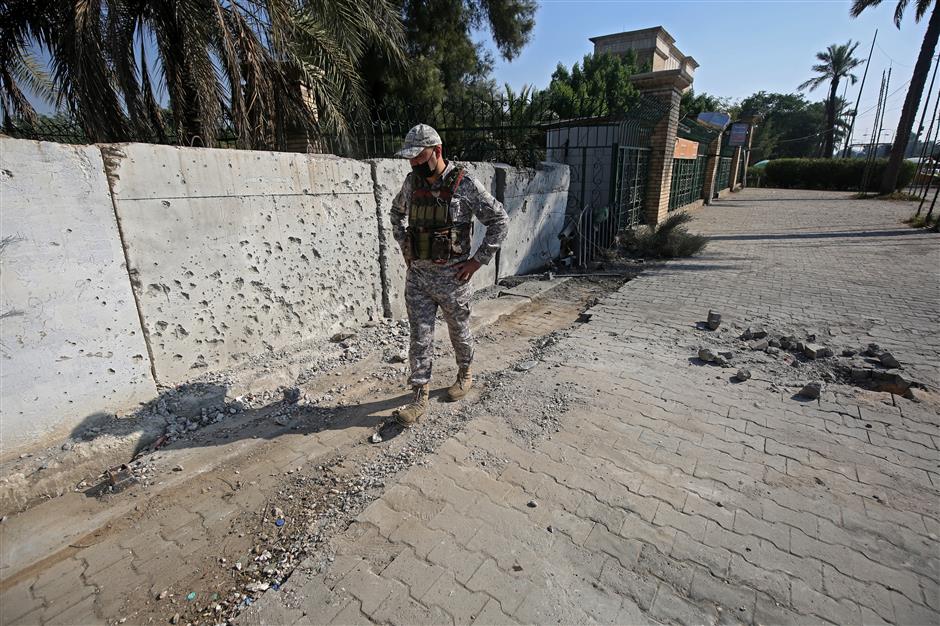 A member of the Iraqi security forces inspects the damage outside the Zawraa park in Baghdad’s Green Zone on Wednesday after volley of rockets slammed into the Iraqi capital breaking a monthlong truce on attacks against the US embassy. According to the Iraqi military, four of the rockets landed in the high-security area, where the US embassy and other foreign missions are based. Another three rockets hit other parts of Baghdad, killing one girl and wounding five civilians.

US Acting Defense Secretary Christopher Miller said on Tuesday the country would reduce troop levels in Iraq and Afghanistan by January 15, asserting that the decision fulfils incumbent President Donald Trump’s pledge to bring forces home from America’s long wars even as Republicans and US allies warn of the dangers of withdrawing before conditions are right.

The plan will accelerate troop withdrawals from Iraq and Afghanistan in Trump’s final days in office, despite arguments from senior military officials in favor of a slower, more methodical pullout to preserve hard-fought gains.

Trump has refused to concede his election loss to Democrat Joe Biden, who is poised to take office on January 20, just five days after the troop withdrawals are to finish.

Miller, who refused to take questions from reporters after reading a prepared statement before TV cameras at the Pentagon, said the US will reduce troop levels in Afghanistan from more than 4,500 to 2,500, and in Iraq from about 3,000 to 2,500.

Speaking a week after replacing former Defense Secretary Mark Esper who was fired by Trump, Miller notably said only that military commanders had agreed to execute it but not that it had been recommended or endorsed by General Mark Milley, chairman of the Joint Chiefs of Staff, or by other senior military officers.

Miller said the US remains ready to respond if conditions in Afghanistan or Iraq deteriorate.

“If the forces of terror, instability, division and hate begin a deliberate campaign to disrupt our efforts, we stand ready to apply the capabilities required to thwart them,” he said in a roughly eight-minute statement — his first extended public remarks since taking office.

The withdrawal plan falls short of Trump’s oft-repeated vow to end America’s long wars. It also runs counter to his guidance that troop withdrawals be based on the conditions on the ground, not a date on the calendar.

In Afghanistan, in particular, military and defense leaders have consistently said the Taliban has not yet met requirements to reduce violent attacks against Afghan government forces.

Some have worried that too-fast troop reductions would strengthen the negotiating hand of the Taliban and weaken the position of an already-weak Afghan government.

Stoltenberg warned NATO could pay a heavy price for leaving Afghanistan too early.

“We now face a difficult decision. We have been in Afghanistan for almost 20 years, and no NATO ally wants to stay any longer than necessary. But at the same time, the price for leaving too soon or in an uncoordinated way could be very high.”

NATO has fewer than 12,000 troops from dozens of nations helping to train and advise the Afghan national security forces. The 30-nation alliance relies heavily on the United States armed forces for transport, logistics and other support.

The accelerated withdrawal goes against the longstanding advice of Trump’s military leadership, including Marine General Frank McKenzie, top US commander for the Middle East.

But officials suggested that commanders will be able to live with the partial pullout, which allows them to keep counterterrorism troops in Afghanistan and gives them time to remove critical equipment.

McKenzie and others have repeatedly argued that a hasty withdrawal could undercut negotiations to finalize ongoing peace negotiations between the Taliban and representatives of Afghan society, including the Afghan government. And they also warn that US forces should remain in the country to keep Islamic State militants in check.

Biden has sounded less absolute about troop withdrawal. He has said some troops could stay in Afghanistan to focus on the counter-terrorism mission.

In response to a questionnaire before the election, he said: “Americans are rightly weary of our longest war; I am, too. But we must end the war responsibly, in a manner that ensures we both guard against threats to our homeland and never have to go back.”