US health-care workers and others recommended for the nation's first COVID-19 inoculations could start getting shots within a day or two of regulatory consent next month, a top official of the government's vaccine development effort said on Sunday.

Moncef Slaoui said the US Food and Drug Administration would likely grant approval in mid-December for distribution of the vaccine produced by Pfizer Inc and German partner BioNTech, launching the largest inoculation campaign in US history.

The FDA's outside advisers are slated to meet on December 10 to review Pfizer's emergency-use application for its vaccine, which the company said was found to be 95 percent effective against infection from the highly contagious respiratory virus.

A second pharmaceutical company, Moderna Inc, is expected to seek separate approval later in December for its COVID-19 vaccine.

Appearing on several network news shows on Sunday morning, Slaoui sketched out a timeline for getting the initial doses of the Pfizer vaccine from FDA authorization into the arms of those who will be first in line to receive it.

"Within 24 hours from the approval, the vaccine will be moving and located in the areas where each state will have told us where they want the vaccine doses," Slaoui told NBC's "Meet the Press."

"So I would expect, maybe on day two after approval on the 11th or 12th of December, hopefully the first people will be immunized across the United States," he said on CNN's "State of the Union" program.

Once emergency-use approval is granted, Slaoui said, the US Centers for Disease Control and Prevention and an advisery panel on immunization practices will recommend who should receive the vaccine first.

Slaoui said they are likely to include doctors, nurses and "front-line" emergency medical personnel, as well as individuals considered to be at the highest risk of severe illness and death from the virus, such as the elderly.

Public health authorities in each state will be responsible for administering the vaccine roll-out, with the first doses distributed to the states proportionate to their populations, he said.

President-elect Joe Biden and his advisers have voiced concern that President Donald Trump's continued refusal to share vaccine data and distribution plans with Biden's transition team could cause delays after the next administration takes office on January 20.

Slaoui said he hoped for a smooth hand-off and did not expect the vaccination effort to be derailed. 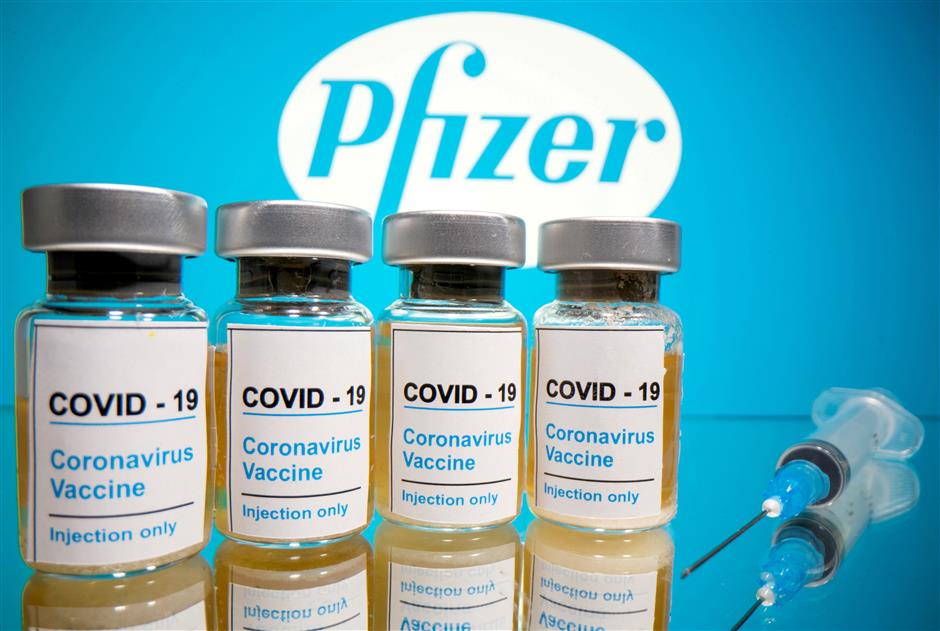 Vials with a sticker reading "COVID-19 / Coronavirus vaccine / Injection only" and a medical syringe are seen in front of a displayed Pfizer logo in this illustration taken on October 31.

Details on the timeline emerged as coronavirus infections continued to rage out of control across the country, further straining hospitals besieged with growing numbers of COVID-19 patients.

Public health experts worried that the surge will only worsen, as millions of Americans prepared to travel and congregate in family groups for Thanksgiving celebrations, despite warnings that they stay at home to avoid spreading the disease.

Many people were scrambling to get tested before Thursday's holiday, leading to long lines at screening sites in New York City and elsewhere. Most pharmacies offering COVID-19 tests in suburban Chicago were fully booked.

"I believe COVID rates will increase just as I believe most New Yorkers will put on weight," New York Governor Andrew Cuomo lamented at a Sunday press conference.

Cuomo also said the city was investigating reports of an ultra-Orthodox Jewish wedding that drew some 7,000 people to a reception in Brooklyn, video footage of which showed throngs of maskless guests celebrating shoulder to shoulder.

The United States surpassed 12 million COVID-19 cases on Saturday, as the nation's death toll climbed to more than 255,000 since the pandemic began.

Reuters data showed the pace of new infections quickening, with nearly 1 million more cases documented over the past six days, compared with the eight days it took to get from 10 million to 11 million cases.

The epicenter of the US pandemic has also shifted in recent weeks, with the Midwest and Rockies leading the nation in terms of rapidly escalating infections.

"It's really spread across the country," Dr Tom Inglesby, director of the Center for Health Security at Johns Hopkins University, said on "Fox News Sunday."

"It's not just in big cities, but it's in rural locations, small towns."

While the prospect of effective vaccines has brought new hope to a country whose social and economic life has been upended by the virus, public distrust of inoculations runs high. In a recent Gallup poll, just 58 percent of Americans said they planned to get a COVID-19 vaccine, up from 50 percent in September.

"Vaccines don't save lives, vaccinations safe lives," he told ABC on Sunday. "The much bigger step is actually getting those vaccinations to the American people. That's hard."