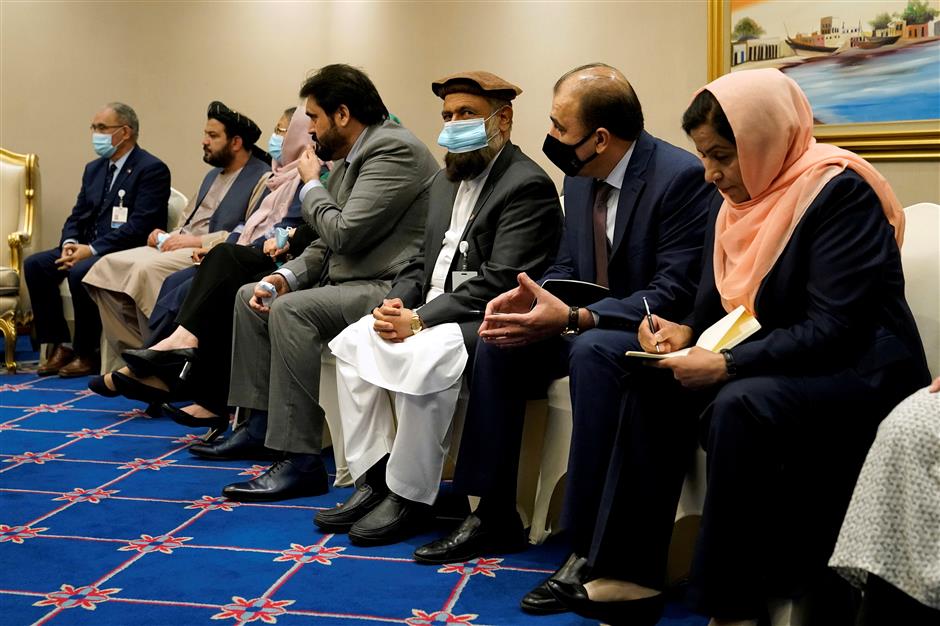 Members of peace negotiation team of the Islamic Republic of Afghanistan attend a meeting with US Secretary of State Mike Pompeo, amid talks between the Taliban and the Afghan government, in Doha, Qatar, on November 21, 2020.

A breakthrough on an initial agreement reached between Taliban and Afghan government negotiators has been held up at the last minute after the insurgent group balked at the document’s preamble because it mentioned the Afghan government by name.

Teams representing the Taliban and the Afghan government have been negotiating in the Qatari capital Doha since September in a bid to reach a consensus on peace talks, moving forward to help end decades of war in Afghanistan.

“The negotiating teams have so far agreed on all 21 articles that provide guiding principles for the negotiations,” Afghan President Ashraf Ghani’s spokesman Sediq Sediqqi said in a statement on Monday.

“At this time, they continue to debate the preamble, in which some issues need further clarification.”

Government and diplomatic sources said that when it came to signing the document which was to include references to the “Islamic Republic of Afghanistan” (the official name of the Afghan government,) in November, the Taliban backed off over the wording.

The Taliban refuse to refer to the Afghan negotiating team as representatives of the Afghan government, as they contest the legitimacy of Ghani’s election.

The Taliban did not immediately respond to request for comment but had earlier said that their stance was to negotiate with Afghans broadly and would not recognize them as negotiators representing the government.