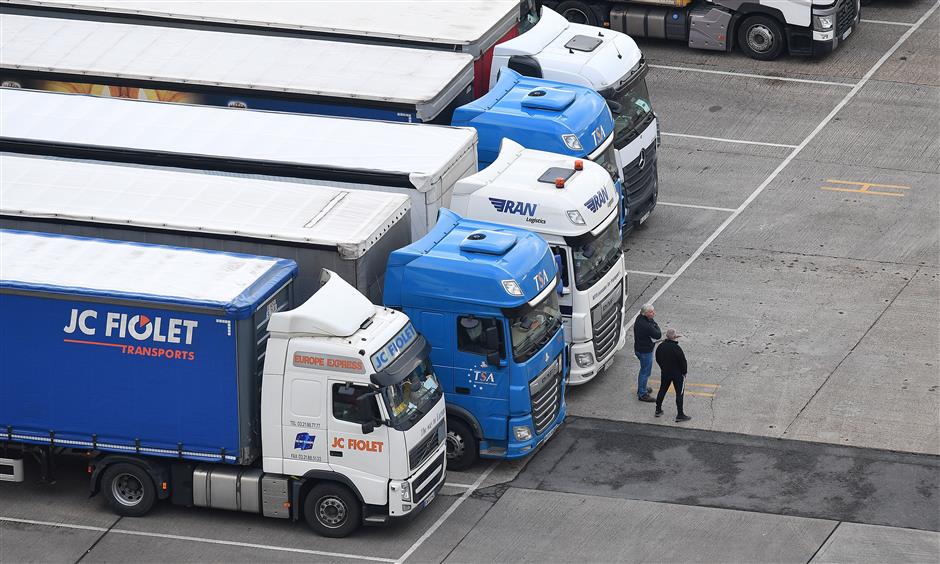 Drivers stand with their lorries as they wait to board a ferry, bound for Europe, at the Port of Dover on the south coast of England on Thursday.

Johnson went to Brussels on Wednesday in a last effort to salvage trade talks that are teetering toward failure and the two leaders agreed that their negotiators should attempt one last push to bridge the divide.

“We had a lively and interesting discussion on the state of play across the list of outstanding issues,” Von der Leyen said in a statement after the dinner.

“We gained a clear understanding of each other’s positions.

“They remain far apart,” she concluded.

A senior UK source said the talks were “frank” and that it remained unclear whether the “very large gaps” between the two sides can be bridged.

The leaders agreed to further discussions by their negotiating teams “over the next few days” and that a “firm decision” should be taken by Sunday, the UK source said.

UK Foreign Secretary Dominic Raab said the Sunday deadline set by Britain and the EU for a decision was final — though he added “you can never say never entirely.”

Johnson had jetted over to Brussels where he made his name as an EU-bashing newspaper reporter. After posing for press pictures, Johnson and von der Leyen headed in for a meeting that was treated as the almost-final chance of a breakthrough before Britain leaves the EU single market at the end of the year.

Though prospects for a breakthrough were slight, Johnson “does not want to leave any route to a possible deal untested,” the UK source said, after the two ate a dinner of scallops and steamed turbot, two of the seafood varieties that European boats fish for in British waters.

“A good deal is still there to be done,” Johnson had told the UK parliament before setting off for Brussels, while insisting Britain would “prosper mightily” with or without agreement.

Months of trade talks have failed to bridge the gaps on three issues — fishing rights, fair-competition rules and the governance of future disputes.

While both sides want a deal, they have fundamentally different views of what it entails.

The EU fears Britain will slash social and environmental standards and pump state money into UK industries, becoming a low-regulation economic rival on the bloc’s doorstep — hence the demand for strict “level-playing-field” guarantees in exchange for access to its markets.

The UK government sees Brexit as about sovereignty and “taking back control” of the country’s laws, borders and waters. It claims the EU is trying to bind Britain to the bloc’s rules indefinitely.

On Thursday, the European Commission laid out contingency plans for a no-deal Brexit to limit disruption to air traffic, and road and rail travel.

The executive body also proposed that Britain and the EU continue to offer reciprocal access to their fishing waters for up to a year.

In response, a UK government spokesperson said: “We will discuss practical arrangements with the EU. We will look very closely at the details,” while noting that Britain was already advanced in its own preparations.