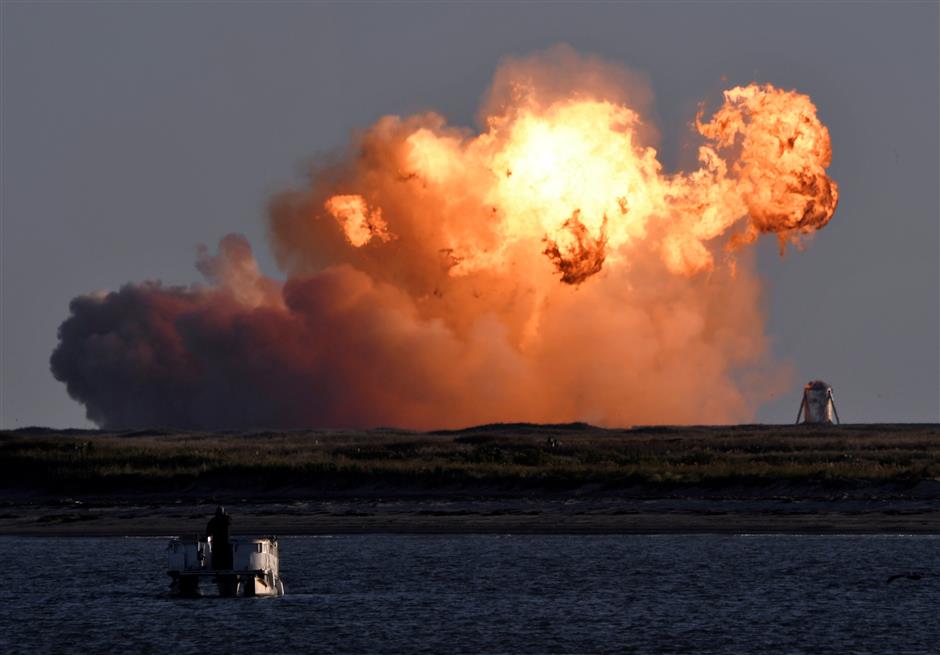 SpaceX’s first super heavy-lift Starship SN8 rocket explodes during a return-landing attempt after it was launched for a test flight in Boca Chica, Texas, the US, on Wednesday.

SpaceX launched its shiny, bullet-shaped, straight-out-of-science fiction Starship several miles into the air from a remote corner of Texas on Wednesday, but the 6 1/2-minute test flight ended in an explosive fireball at touchdown.

It was the highest and most elaborate flight yet for the rocketship that Elon Musk says could carry people to Mars in as little as six years.

Despite the catastrophic finale, he was thrilled. “Mars, here we come!!” he tweeted.

This latest prototype was shooting for an altitude of up to 12.5 kilometers. That’s almost 100 times higher than previous hops and skimming the stratosphere. Starship seemed to hit the mark or at least come close. There was no immediate word from SpaceX on how high it went.

The full-scale, stainless steel model — 50 meters tall and 9 meters in diameter — soared out over the Gulf of Mexico. After about five minutes, it flipped sideways as planned and descended in a free-fall back to the southeastern tip of Texas near the Mexican border. The Raptor engines reignited for braking and the rocket tilted back upright. When it touched down, however, the rocketship became engulfed in flames and ruptured, parts scattering.

Musk said in a tweet immediately following the landing mishap that the rocket’s “fuel header tank pressure was low” during descent, “causing touchdown velocity to be high.”

He added that SpaceX had obtained “all the data we needed” from the test and hailed the rocket’s ascent phase a success.

The experimental flight took place in a nearly deserted part of southern Texas — an area empty enough that any flight malfunction would be unlikely to cause physical or property damage. Musk recently announced he plans to move to the vast southern US state from California.

SpaceX made its first attempt to launch Starship on Tuesday, but a problem with its Raptor engines forced an automatic abort just one second before liftoff.

The complete Starship rocket, which will stand 120 meters tall when mated with its super-heavy first-stage booster, is the company’s next-generation fully reusable launch vehicle — the center of Musk’s ambitions to make human space travel more affordable and routine.