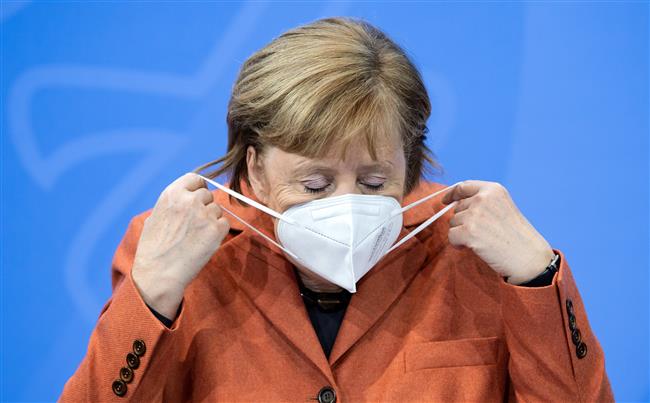 German Chancellor Angela Merkel puts off her face mask before a press conference following crunch talks via video conference with Germany’s state premiers on extending coronavirus restrictions at the Chancellery in Berlin on Sunday.

Germany will go into a partial lockdown from Wednesday with non-essential shops and schools to close in a bid to halt an “exponential growth” in coronavirus infections.

The partial lockdown will apply until January 10, with companies also urged to allow employees to work from home or offer extended company holidays, under the new measures agreed by Chancellor Angela Merkel with regional leaders of Germany’s 16 states on Sunday.

“That would help to implement the principle ‘we’re staying at home,’” according to the policy paper agreed by Merkel and state premiers.

Germans are urged to limit their social contacts to another household, with a maximum of five people excluding children under 14 meeting each time.

From Christmas Eve to Boxing Day, the contacts would be eased to allow gatherings with another four people excluding children, but who should be limited to close relatives or partners.

Germany in November closed leisure and cultural facilities and banned indoor dining in restaurants. The measures had helped to halt rapid growth of infections after the autumn school holidays, but numbers had plateaued at a high rate.

Merkel had repeatedly pushed for tougher curbs to break the chain of contagion, but implementation of the rules is in the hands of individual states and some had been reluctant to impose more curbs.

The mood, however, tipped over in the last week after Germany recorded new daily death tolls reaching close to 600 and the country’s disease control agency Robert Koch-Institut reported that the infections have taken a worrying turn.

“Today is not the day to look back or to see what could have been, rather, today is the day to do what is necessary,” said Merkel, pointing to “very high numbers of deaths” and stressing the urgent need for action.