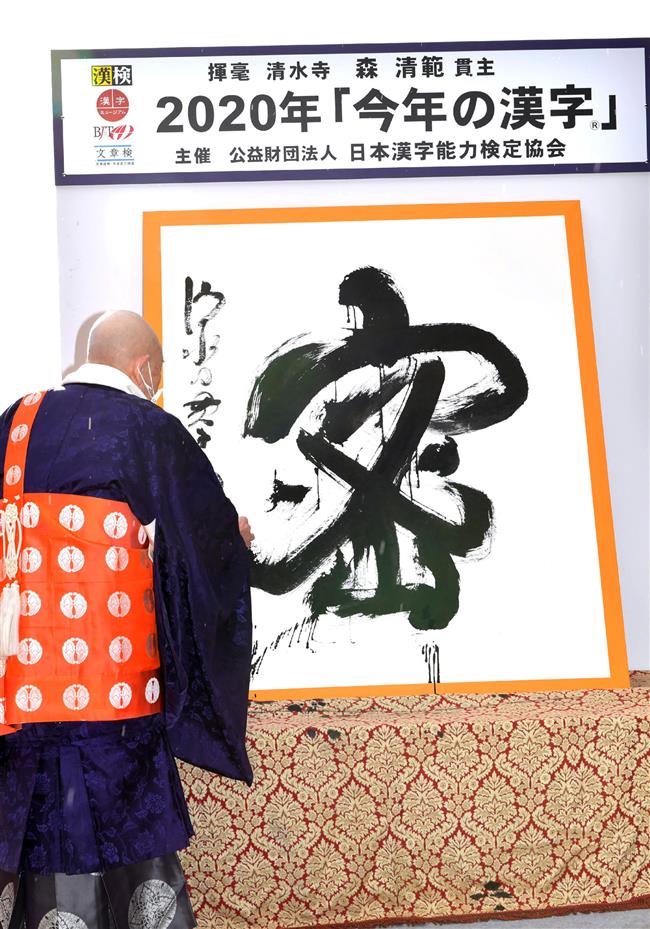 Seihan Mori, master of the ancient Kiyomizu temple, uses calligraphy to write the Chinese character, known in Japan as “kanji,” for “mitsu,” which was chosen as the single best kanji to symbolize the year 2020, in Kyoto on Monday.

A written character that evokes everything people in Japan were urged to avoid this year was on Monday voted the country’s top linguistic symbol of 2020.

Japan has seen a relatively small coronavirus outbreak overall and never imposed a strict lockdown like those seen elsewhere in the world.

Instead, residents were strongly advised to use their own judgment and steer clear of situations described as “mitsu” — meaning dense, crowded and close — to limit the spread of COVID-19.

Now “mitsu” has been chosen as the character of the year in an annual public ballot organized by the Japan Kanji Aptitude Testing Foundation. It took around 14 percent of over 208,000 votes.

Japanese TV stations broadcast the announcement live, as Seihan Mori, master of the ancient Kiyomizu temple in Kyoto, painted the character on a big white panel with an ink-soaked calligraphy brush.

“After the government asked the public to avoid crowded, poorly ventilated spaces, and places that carry the risk of close contact with strangers ... many began acting with ‘mitsu’ always in mind,” the organization said.

Other contenders in the top 10 for 2020’s character, or kanji, were mostly coronavirus-related, such as illness and perish.