Mass rave in France breaks up amid virus fears 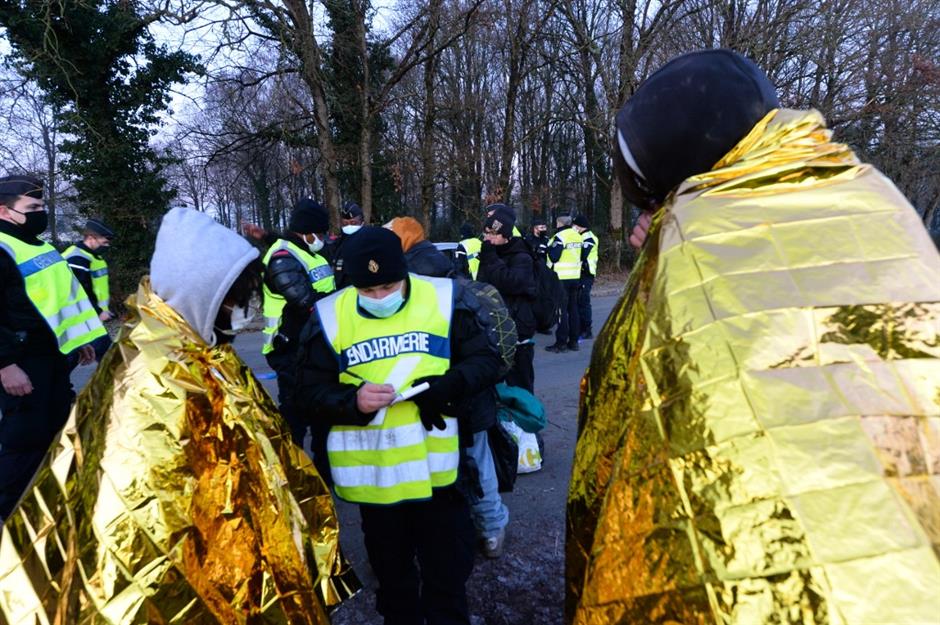 French Gendarmes writes down the details of youth following the break up of a party near a disused hangar in Lieuron about 40km south of Rennes, on January 2, 2021. Some 2,500 partygoers attended an illegal New Year rave in northwestern France, violently clashing with police who failed to stop it and sparking concern the underground event could spread the coronavirus, authorities said Friday.

Hundreds of revellers were booked for breaking coronavirus restrictions as an illegal rave in northwestern France ended on Saturday after more than two days of partying that saw clashes with police.

Police had failed to stop the underground event, which drew around 2,5000 people from Thursday night in two disused warehouses in Lieuron, south of the city of Rennes in Brittany.

Such mass gatherings are banned across France to prevent the spread of COVID-19, and a nationwide 8 pm curfew — which was not lifted for New Year — applies across the country.

Techno music had blared out during the night from the warehouses, which had been transformed into illegal nightclubs for partygoers who had flocked to the site from across France and even from abroad.

The local prefecture said Saturday the music had been switched off and sound systems dismantled after two nights, and the first revellers began leaving the site before dawn.

By 10:15 am it was under the control of police, the local prefecture said.

Interior Minister Gerald Darmanin said in a tweet that police had booked more than 1,200 people and seized a truck, sound equipment and generators from the site of the "illegal raveparty."

He said the large police presence at the site had led to the breakup of the event "without violence".

The regional prefect, Emmanuel Berthier, said 800 people had been booked for failing to respect the curfew restrictions or wear masks or for participating in an illegal assembly.

He told a press conference that police fined several hundred others for use of narcotics.

Police on access roads were checking all those leaving the site, on foot or in vehicles, using torches to check their eyes for signs of drugs use, an AFP photographer said.

Police reinforcements continued to arrive and close off the site in a calm atmosphere Saturday morning, the photographer said.

French authorities have been worried about mass rave parties throughout the pandemic, but New Year's Eve was a particular concern.

On Thursday night the police had tried to "prevent the event but faced fierce hostility from many partygoers" who set one of their cars on fire and threw bottles and stones, the prefecture said Friday.

First aid workers had distributed hand gel and masks at the event to try and limit the spread of the coronavirus.

The regional health authority in Brittany noted the "high risk of the spread of COVID-19" at the event, and called on those who took part to undergo coronavirus tests and self-isolate immediately for seven days.

The prefecture said in a tweet that a testing centre had been set up in a gymnasium in Lieuron.

"They have put their lives in danger, their health, they must now protect those around them," it said.

The French government, facing the threat of a new wave of COVID-19 infections, announced on Friday it was bringing forward its nighttime curfew by two hours in 15 regions to help combat the virus.

The country recorded around 20,000 new cases and 133 deaths on Friday, bringing the total number of fatalities to almost 64,800.