Thousands rally in Baghdad to mourn commanders slain by US 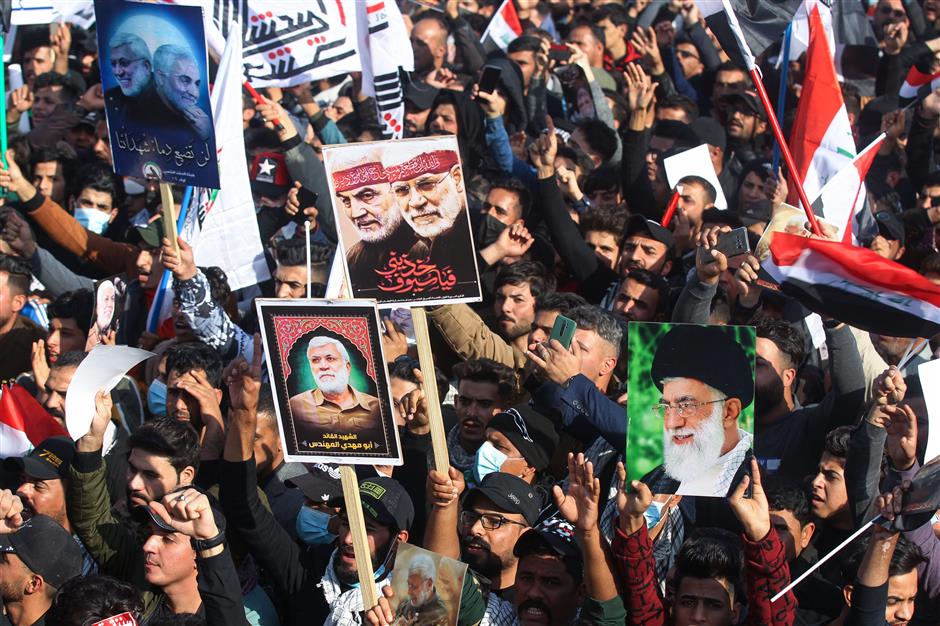 Iraqis rally in Baghdad on Sunday to mark one year after a US drone strike killed Iran’s revered commander Qasem Soleimani and his Iraqi lieutenant Abu Mahdi al-Muhandis.

Thousands of Iraqi mourners chanted “revenge” and “no to America” on Sunday, one year after a US drone strike killed Iran’s revered commander Qasem Soleimani and his Iraqi lieutenant Abu Mahdi al-Muhandis.

Pro-Iranian supporters, many dressed in black, massed in Baghdad’s central Tahrir Square to also condemn Iraqi Prime Minister Mustafa al-Kadhemi as a “coward” and an “agent of the Americans.”

The anniversary of the Baghdad drone strike — which brought Washington and Tehran to the brink of war in early 2020 — was also marked in recent days across Iran and by supporters in Syria, Lebanon, Yemen and elsewhere.

The lead-up to the commemorations of the Shiite Muslim commanders sharply heightened regional tensions in the weeks before US President Donald Trump, who ordered the killings, leaves the White House.

In Iraq, the powerful, state-sponsored pro-Iranian Hashed al-Shaabi paramilitary network which Muhandis commanded has led the angry vigils for him and General Soleimani, who headed the foreign operations arm of Iran’s Islamic Revolutionary Guard Corps.

Sunday’s Baghdad rally was a show of force for the armed groups, which despite being formally integrated into the Iraqi security apparatus have increasingly challenged the Kadhemi government.

Thousands of mourners had on Saturday night converged at the spot near Baghdad’s international airport where the US hit the two vehicles and killed Soleimani, Muhandis and eight other men.

By candlelight, they honored their “martyrs” and condemned the American “great Satan” at the site where nearby walls are still pockmarked by shrapnel.

“We tell America and the enemies of Islam that they can inflict the greatest sacrifices on us, but we will continue to resist despite the bloodshed,” said Hashed supporter Batul Najjar.

The Hashed — factions of which US has blamed for rocket strikes against its embassy and troops in Iraq — has increasingly challenged Kadhemi, whom it accuses of having helped plot the drone strikes.

This has brought to the boil once more tensions in the war-battered and politically fragile country which the US invaded in 2003, and which remains mired in economic crisis amid low oil prices and the coronavirus pandemic.

Ahead of the Tahrir Square rally, Ahmed Assadi, one of the leaders of Hashed’s parliamentary bloc, vowed: “Abu Mahdi al-Muhandis, we will go out by the millions to brandish your portrait on Tahrir.”

Giant posters of Soleimani and Muhandis were hung up above the iconic square which in late 2019 became the center of anti-government protests.

“We have come to say no to America and to any other occupier who wants to come and defile our land,” one of the mourners Oum Mariam said.

After the Soleimani killing, Iraq’s parliament initially voted to expel US forces from the country. However, despite some withdrawals, about 3,000 American troops remain.

Amid the flaring tensions, Iraqis, and many in the wider region, are nervously watching for any signs of escalation before Trump leaves the White House on January 20.

Trump confronted decades-old foe Iran by pulling out in 2018 from its nuclear deal with world powers and launching a “maximum pressure” campaign to further economically punish and isolate the country.

Trump recently tweeted that the US was hearing “chatter of additional attacks against Americans in Iraq,” and warned that “if one American is killed, I will hold Iran responsible.”

In recent days, US B-52 bombers have flown across the region for the second time in less than a month. But in what some read as a sign of de-escalation, the US has also reportedly ordered its Nimitz aircraft carrier to leave the Gulf.

Iran’s Revolutionary Guards chief Hossein Salami vowed on Saturday to respond to any “action the enemy takes” with “a reciprocal, decisive and strong blow.”

Iran and the US — bitter foes since the 1979 Iranian Islamic revolution and the US embassy hostage crisis in Tehran — have twice come to the brink of war since June 2019, most recently after Soleimani’s killing.

Iran’s Foreign Minister Mohammad Javad Zarif on Thursday accused Trump of aiming to fabricate a “pretext for war,” after the president blamed Tehran for a December 20 rocket strike on the US embassy in Baghdad.