No Wisconsin charges against white officer in shooting of Blake 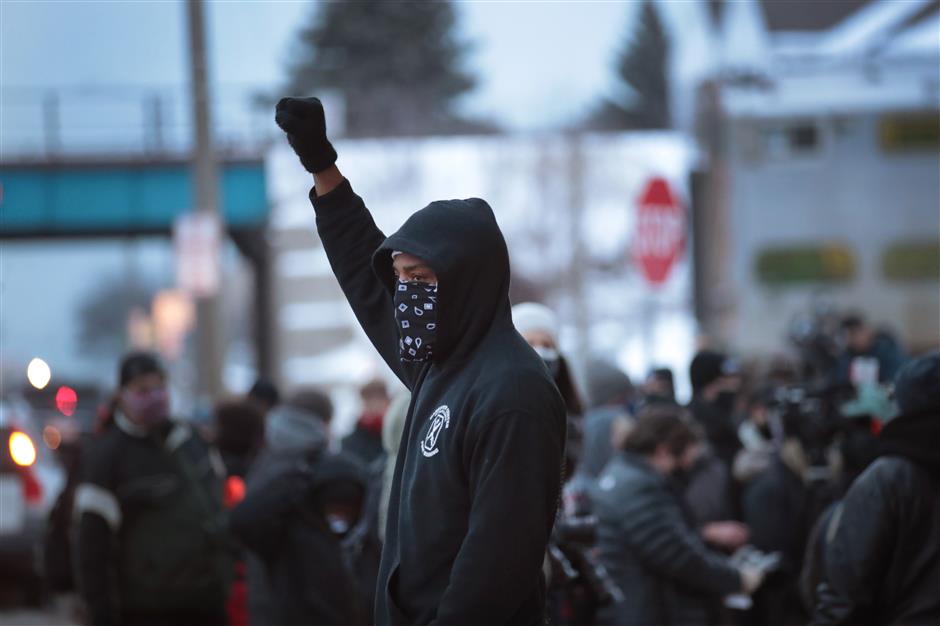 Supporters of Jacob Blake rally on a street in Kenosha, Wisconsin on Tuesday, following the announcement that no charges would be filed against the police officer who shot Blake.

A Wisconsin prosecutor on Tuesday declined to file charges against a white police officer who shot a black man in the back in Kenosha in August last year, concluding he couldn’t disprove the officer’s contention that he acted in self-defense because he feared the man would stab him.

The decision, met with swift criticism from civil rights advocates and some public officials, threatened to reignite protests that rocked the city after the August 23 shooting that left Jacob Blake paralyzed.

Wisconsin’s Governor Tony Evers called the decision “further evidence that our work is not done” and called for people to work together for equity.

Kenosha County District Attorney Michael Graveley said investigators concluded Blake was carrying a knife when police responded to a report he was trying to steal a car.

Officer Rusten Sheskey said he “feared Jacob Blake was going to stab him with the knife” as he tried to stop Blake from fleeing the scene.

“I do not believe the state ... would be able to prove that the privilege of self-defense is not available,” Graveley said.

“This is going to impact this city and this state and this nation for many years to come,” said Justin Blake, an uncle of Jacob Blake.

“Unless the people rise up and do what they’re supposed to do. This is a government for the people by the people, correct? We talk about this Constitution everybody’s supposed to be so committed to, and yet we stand in the state that has the most convictions of African Americans in the United States. So they’re weighing heavy on one side of justice, but they’re allowing police officers to rain down terror on our communities. It’s unjust.”

Ben Crump, an attorney for Blake’s family, said in a statement the decision “further destroys trust in our justice system” and said he would proceed with a lawsuit. In a later tweet, he questioned whether Blake threatened Sheskey with a knife, saying “nowhere does the video footage show a knife extended and aimed to establish the requisite intent.”

A federal civil rights investigation into Blake’s shooting is still under way. Matthew Krueger, the US attorney for Wisconsin’s Eastern District, said the Department of Justice will make its own charging decision.

The Blake shooting happened three months after George Floyd died while being restrained by police officers in Minneapolis, a death that was captured on bystander video and sparked outrage and protests that spread across the US and beyond.

The galvanized “Black Lives Matter” movement put a spotlight on inequitable policing and became a fault line in politics, with President Donald Trump criticizing protesters and pushing a law-and-order message that he sought to capitalize on in Wisconsin and other swing states.

The shooting of Blake, captured on bystander video, turned the United States’ spotlight on Wisconsin during a summer marked by protests over police brutality and racism.

More than 250 people were arrested during protests in the days that followed, including then-17-year-old Kyle Rittenhouse, a self-styled medic with an assault rifle who is charged in the fatal shootings of two men and injuring a third.

Kenosha, a city of 100,000 on the Wisconsin-Illinois border about 75 kilometers north of Chicago, braced for renewed protests ahead of the charges, with concrete barricades and metal fencing surrounding the county courthouse, plywood protecting many businesses and the mayor granted power to impose curfews.

As temperatures dipped near freezing on Tuesday evening, about 20 protesters gathered and marched in an area north of downtown, chanting “No justice, no peace.”

About 15 cars, some honking their horns, followed.

Vaun Mayer, a 33-year-old activist from Milwaukee who is Black, drove to Kenosha to protest. He said he didn’t expect the officer to be charged, calling Graveley’s decision just the latest in a line of prosecutors failing to charge police officers in Wisconsin.

“We’re used to this and we didn’t expect anything different than this,” he said.