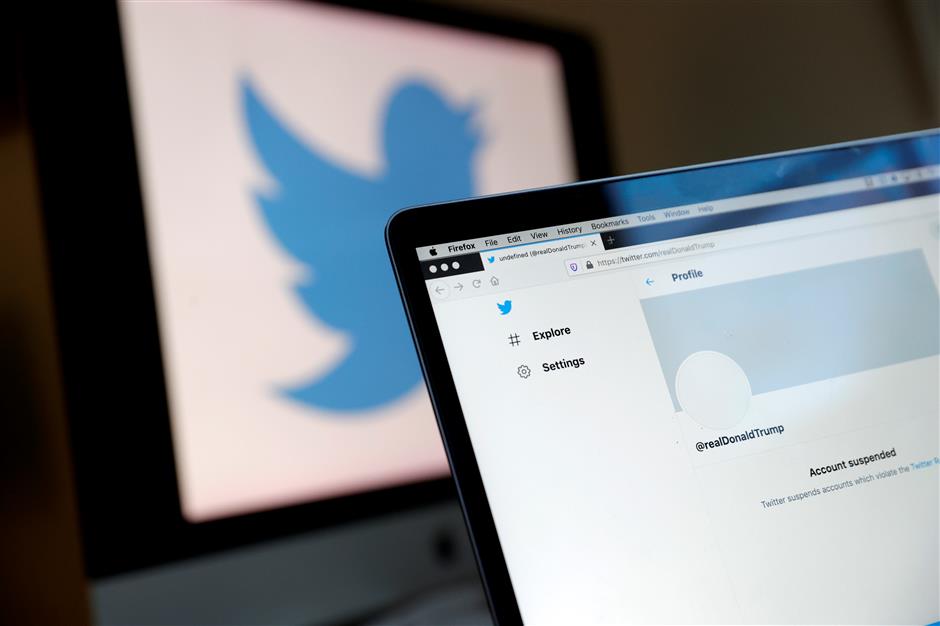 The suspended Twitter account of US President Donald Trump appears on a laptop screen on January 8, 2021, in San Anselmo, California.

Twitter Inc said on Friday that it has permanently suspended US President Donald Trump's account due to the risk of further incitement of violence following the storming of the US Capitol on Wednesday by hundreds of his supporters.

"After close review of recent Tweets from the @realDonaldTrump account and the context around them we have permanently suspended the account due to the risk of further incitement of violence," the company said in a tweet.

Social media companies have cracked down on Trump's accounts in the wake of the turmoil on Wednesday. Facebook Inc said earlier this week it was suspending his account until at least the end of his presidential term.

The Republican president is due to hand over to Democratic President-elect Joe Biden on January 20.

In a blog post on Friday, Twitter said that two of the president's tweets posted that day were in violation of its policy against the glorification of violence.

Twitter had temporarily blocked Trump's account, which had more than 88 million followers, on Wednesday following the siege of Capitol Hill, and warned that additional violations by the president's accounts would result in a permanent suspension.

Trump was required to delete three rule-breaking tweets before his account was unblocked. He returned to Twitter on Thursday with a video acknowledging that Joe Biden would be the next US president.

Twitter said that Trump's tweet that he would not be attending Biden's inauguration was being received by a number of his supporters as further confirmation that the November 3 election that he lost was not legitimate.

It said another tweet praising "American Patriots" and saying his supporters "will not be disrespected or treated unfairly in any way, shape or form!!!" could be seen as "further indication that President Trump does not plan to facilitate an orderly transition."

Trump's personal @realDonaldTrump account has sometimes fired off more than 100 tweets a day and been used to communicate with his supporters, spread misinformation, insult opponents and fire staff.

Both Twitter and Facebook have long afforded Trump special privileges as a sitting elected world leader, saying that tweets that may violate the company's policies would not be removed because they were in the public interest.

They said he would lose access to those privileges upon leaving office, however.