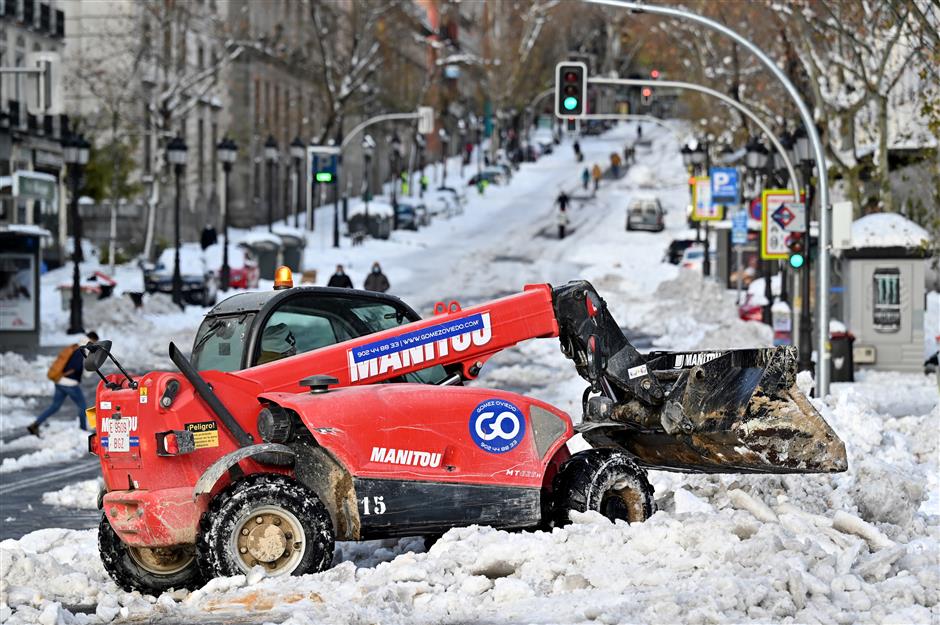 A snowplow clears a road on Sunday after heavy snowfall in Madrid.

After the worst snowstorm in decades, Spanish officials were racing on Sunday to clear the roads of snow before a cold snap transforms them into icy death traps.

Spain’s weather forecasters AEMET predicted heavy frost overnight into Monday in large parts of Spain. In mountainous areas temperatures would drop below minus 10 degrees Celsius, conditions that could last until Thursday.

“Our aim is to make the most of every minute before Monday when the drop in temperature happens,” Madrid’s mayor Jose Luis Martinez-Almeida said.

“From then, until the end of the week, it’s going to be very difficult to get about.”

Madrid and the surrounding region was one of the worst-hit areas across the country, with levels of snowfall not seen since 1971.

The army also had to clear the snow from Madrid airport, one of the region’s worst-hit by the snowstorm, which had forced the cancellation of flights from late Friday.

They also had to clear access to hospitals, still struggling to cope with the coronavirus crisis.

The storm, through Friday and Saturday, left much of the country under dozens of centimeters of snow, an amount rarely experienced in Spain, blocking many major roads.

More than 700 major routes were still impassable on Sunday morning, said the government, with rail travel to and from Madrid also canceled.