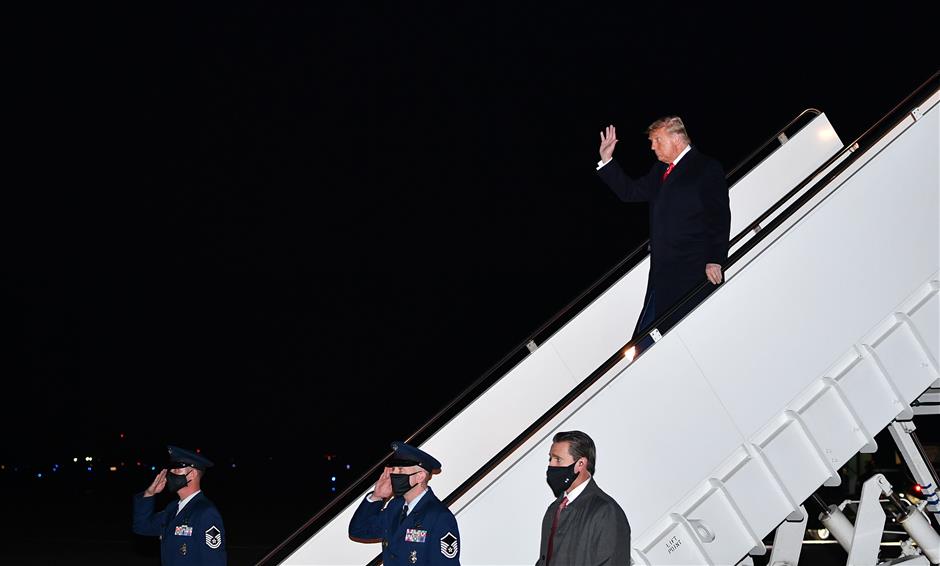 US President Donald Trump waves as he steps off Air Force One upon arrival at Andrews Air Force Base in Maryland on January 12, 2021.

On the eve of his likely impeachment, President Donald Trump on Tuesday denied responsibility for the storming of Congress by a mob of his supporters, and warned of "tremendous anger" across the country.

Although Trump also urged "peace and calm" during a quick visit to his US-Mexico border wall in Alamo, Texas, his overall message was of refusal to take blame.

The House of Representatives is set on Wednesday to make Trump the first president in US history impeached for a second time over his January 6 speech in which he claimed he was the real winner of the November election, then urged supporters to march on Congress.

A defiant Trump insisted on his way to Texas that "everybody" thought his speech was "totally appropriate."

Trump dubbed his likely impeachment a "continuation of the greatest witch hunt in the history of politics."

And he warned that while "you have to always avoid violence," his supporters are furious.

Democrats are all but sure to pass impeachment in the House.

The Republican-controlled Senate has been considered unlikely to call an emergency session and put Trump on trial before his term runs out on January 20.

However, significant cracks are appearing in the party that Trump has held in thrall for the last four years.

And in the House, the No.3 Republican, Representative Liz Cheney, said she would be voting to impeach. This came after the top House Republican, Kevin McCarthy, said members would have a free vote and not be required to toe the party line — a significant weakening of support for Trump.

Barred from Twitter and Facebook — two platforms integral to his shock rise to power in 2016 — Trump is for the first time struggling to shape the news message, a censoring by Big Tech that he called a "catastrophic mistake."

Ever since the November 3 election, the Republican real estate tycoon has been obsessively pushing his lie that Biden stole the election.

Trump has yet to congratulate Biden or urge his supporters to stand behind the incoming president after he is inaugurated on January 20 — a gesture of political unity considered all but routine after US elections.