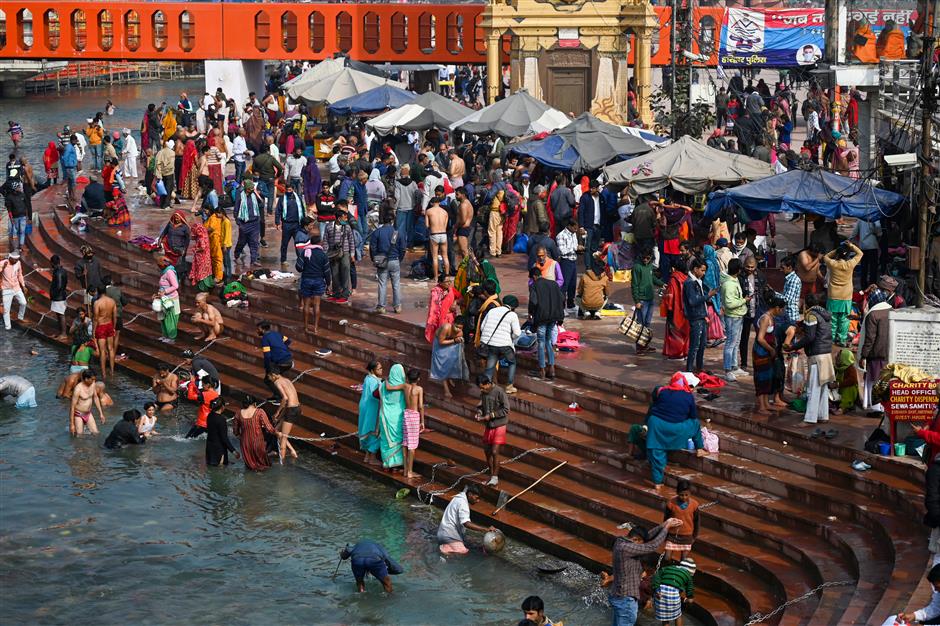 Hindu devotees gather at steps on the River Ganges in the Indian city of Haridwar on Wednesday for this year’s Kumbh Mela religious festival.

Hindu pilgrims flocked to the Ganges River in India on Wednesday, shrugging off the risk of coronavirus, a day before the start of the Kumbh Mela — a religious festival that attracts millions each time it is held.

Despite India having the second most COVID-19 infections in the world, the virus has not stopped devout Hindus from making the pilgrimage.

“The pandemic is a bit of a worry, but we are taking all precautions,” said organizer Siddharth Chakrapani, who expected between 800,000 and a million people to attend just today.

“I’m sure Maa Ganga will take care of their safety,” he added, referring to the river considered holy by the faithful.

According to Hindu mythology, gods and demons fought a war over a sacred pitcher containing the nectar of immortality. Drops fell at four different locations, which now alternate as hosts for the immense gatherings.

Recognized as a cultural heritage by UNESCO in 2017, the last Kumbh Mela in Allahabad in 2019 attracted around 55 million people over 48 days.

This year, from today, Haridwar in northern India is the host, and several million people were expected to throng the holy city in Uttarakhand state over the coming seven weeks.

Taking a dip in the Ganges is considered a sacred rite by Hindus, who come from across India and beyond its borders.

Holy men known as sadhus — in dreadlocks and smoking cannabis — are a regular feature at the Kumbh Mela, camping by the river and offering blessings to those who come for the holy immersion.

On Wednesday, its banks teemed with pilgrims and vendors while families laid out plastic sheeting for picnics.

Most were oblivious to the threat of coronavirus.

“India is not like Europe ... when it comes to immunity we are better,” said 50-year-old pilgrim Sanjay Sharma.

“It’s really sad to see people not gathering at Kumbh in the same numbers as they would earlier — just because of a sneeze or a cough.

“The greatest truth on Earth is death. What’s the point of living with fear?”

This week sees several other religious festivals in India, including the Gangasagar in Kolkata where officials expect around 15,000 people.

Madurai in the southern state of Tamil Nadu is due to host a bull-chasing carnival known as Jallikattu.