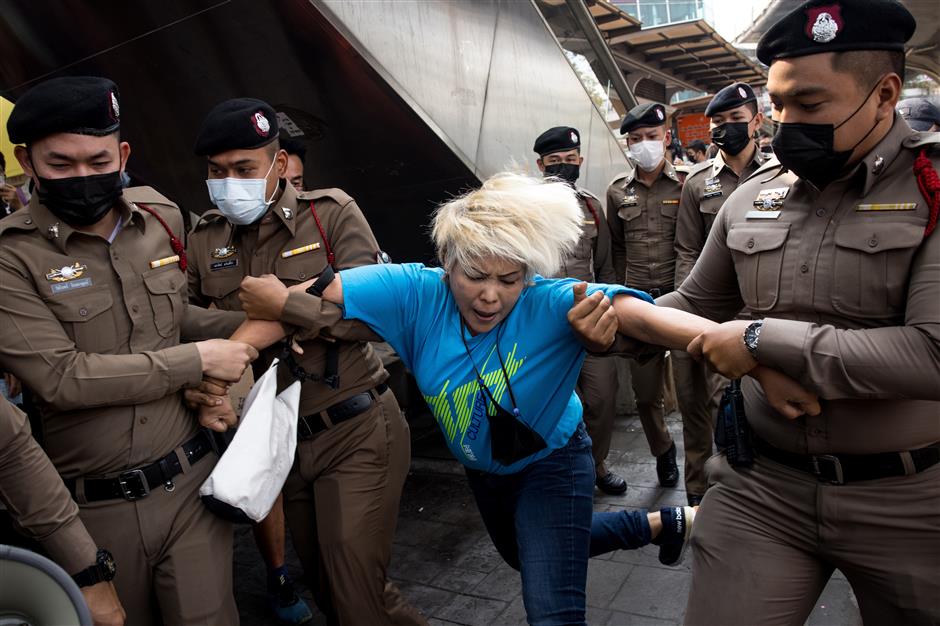 A woman is taken away by police during a demonstration against section 112, Thailand’s royal defamation lese majeste law, at Victory Monument in Bangkok on Saturday.

A Thai woman convicted of insulting the royal family was jailed on Tuesday for more than 43 years, a legal rights group said, the harshest punishment ever handed out under the country’s strict lese majeste laws.

The verdict comes as Thailand ramps up its use of the controversial legislation against democracy protesters, whose demands include reforms to the ultra-powerful monarchy.

Ostensibly meant to shield the royal family from defamation, insults or threats, section 112 of the penal code is routinely interpreted to include any criticism of the monarchy.

Anchan, whose last name was withheld by human rights lawyers to protect her relatives, was convicted on Tuesday on 29 counts of lese majeste and given a total of 87 years in prison.

The court halved her sentence because she had confessed, according to the Thai Lawyers for Human Rights group, which tracks royal defamation cases.

Anchan, a former civil servant, was first arrested in 2015 after being linked to underground podcast host known as “DJ Banpodj,” a fiery critic of the monarchy.

She was initially kept in pre-trial detention for three years before being released on bail.

The previous longest sentence for lese majeste was 35 years handed to a man in 2017.