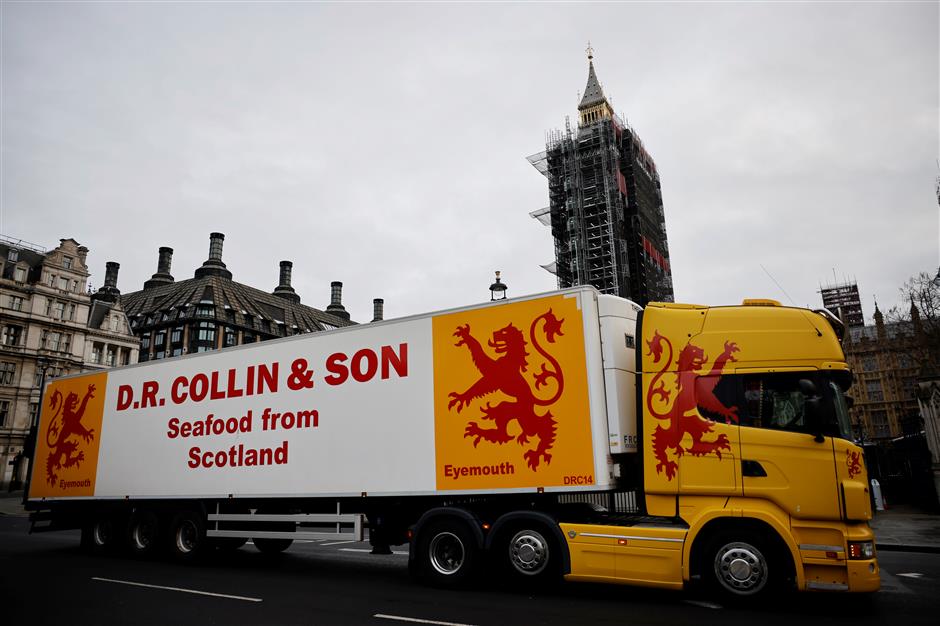 Lorries from Scottish seafood companies drive past the Houses of Parliament in a protest action by fishermen against post-Brexit red tape and coronavirus restrictions, which they say could threaten the future of the industry, in London on Monday.

More than 20 shellfish trucks parked on roads near the British parliament and Prime Minister Boris Johnson’s Downing Street residence on Monday to protest against post-Brexit bureaucracy that has throttled exports to the European Union.

Many fishermen have been unable to export to the EU since catch certificates, health checks and customs declarations were introduced at the start of this year, delaying their deliveries and prompting European buyers to reject them.

“We strongly feel the system could potentially collapse,” said Gary Hodgson, a director of Venture Seafoods, which exports live and processed crabs and lobsters to the EU.

“Prime Minister Boris Johnson needs to be honest with us, with himself and with the British public about the problems for the industry.”

David Rosie at DR Collin & Son, which employs 200 people, used to send one or two trucks a night from the UK to France carrying live crab, lobster and langoustine worth around 150,000 pounds (US$203,000). He said he had not exported a single box this year.

Fishermen, he said, “lost their livelihoods in the turn of a clock” when Britain left the EU on New Year’s Eve.

Under a deal last month, British trade with the EU remains free of tariffs and quotas.

But the creation of a full customs border means goods must be checked and paperwork filled in, shattering express delivery systems.

Using a phrase that has angered many business owners, Johnson described the changes as “teething problems,” and said they had been exacerbated by the COVID-19 pandemic.

He said an additional 23-million-pound fund had been created to compensate businesses that “through no fault of their own have experienced bureaucratic delays, difficulties getting their goods through where there is a genuine buyer on the other side of the channel.”

The government said this extra cash was on top of 100 million pounds over the next few years.

Britain’s Department for Environment, Food and Rural Affairs said that as well as financial support, it was working with the industry and the EU to address documentation issues.

“Our priority is to ensure that goods can continue to flow smoothly to market,” a spokesperson said.

Fishing contributes 0.1 percent of Britain’s gross domestic product, but for coastal communities it is a lifeline and a traditional way of life.

﻿
Special Reports
﻿
UK shellfish protesters raise a stink over Brexit
Baby Blimp will live on as a legacy for Trump
Fire sparks false alarm in jittery Washington as troops hit streets
Norway says no links between deaths and vaccine
Thai woman gets record lese majeste jail sentence
Spaniards slayed Aztecs who ate their comrades
One in eight in England have had COVID: official data
Trump orders assessment of security risks of Chinese-made drones in US fleet
WHO pandemic review panel highlights effective multilateralism in COVID-19 response
Biden team says US will not lift travel bans, despite Trump statement
EXPLORE SHINE