Biden to be sworn in as 46th US president, ending Trump era 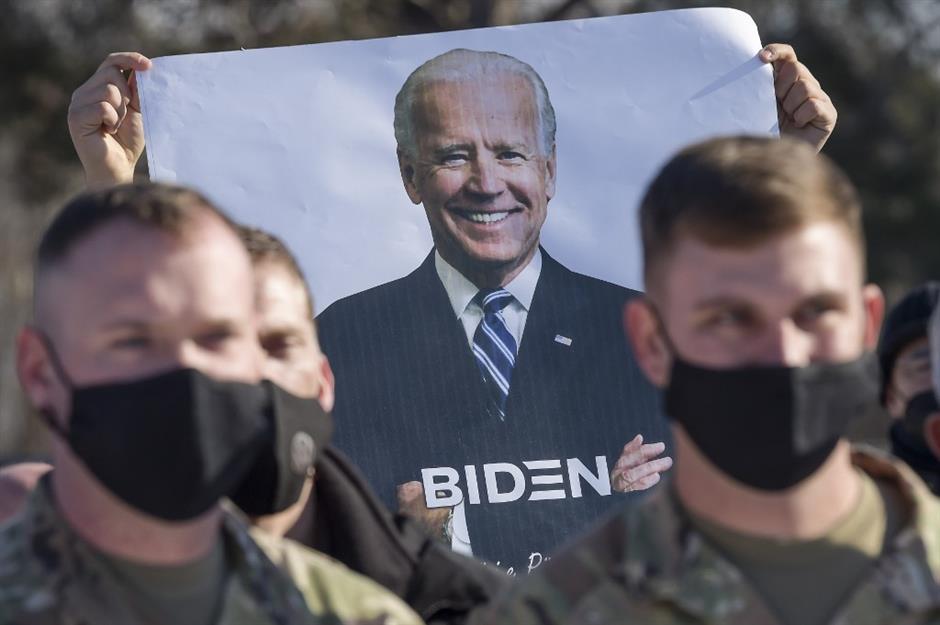 Joe Biden will be sworn in as the 46th US president Wednesday, drawing a curtain on the most tumultuous administration of modern times and charting a new course to tackle COVID-19 and unite a splintered nation.

Outgoing President Donald Trump entered the White House four years ago as a brash billionaire outsider, but he is being ousted by a polar opposite whose deep knowledge of Washington and personal scars will unquestionably set a different tone.

Biden, a 78-year-old former vice president and longtime senator, will take the oath of office at noon (1700 GMT) on the US Capitol's western front, the very spot where pro-Trump rioters clashed with police two weeks ago before storming Congress in a deadly insurrection.

While a transition of power will occur much as it has for more than two centuries, this inauguration is unlike any other.

Official Washington has taken on the dystopian look of an armed camp, protected by some 25,000 National Guard troops tasked with preventing any repeat of this month's attack.

And with the pandemic raging, the general public is essentially barred from attending the swearing-in, leading to the unprecedented sight of an empty National Mall on Inauguration Day.

With the death toll soaring past 400,000, Biden on Tuesday led a powerful tribute to victims of COVID-19 as he arrived in Washington.

Biden, who has suffered deep personal tragedy and is known for his public displays of emotion, has stressed the need to unite the country after Trump's chaos.

"It's hard sometimes to remember, but that's how we heal. It's important to do that as a nation," Biden said in somber remarks at the reflecting pool in front of the Lincoln Memorial.

Inauguration eve is normally a time of massive crowds gathering in the capital, but Biden, joined by Vice President-elect Kamala Harris, was almost alone at the reflecting pool.

On the Mall's grassy expanse, some 200,000 flags have been planted to represent the absent crowds at the inauguration.

Trump, who has not appeared in public for a week, broke days of silence with a pre-recorded farewell video address on Tuesday.

For the first time, he asked Americans to "pray" for the success of the incoming administration — a change from months spent persuading his Republican followers that the Democrats cheated their way to election victory.

Trump, whose efforts to combat the COVID-19 pandemic and console its victims have been widely criticized, will snub Biden by not attending the inauguration.

He has also yet to personally congratulate Biden, who first ran for president in 1987, on his win, and did not invite him for the customary cup of tea in the Oval Office.

In one of his last acts before he flies to Florida on Wednesday morning, Trump issued scores of pardons to people convicted of crimes or facing charges, including several key allies.

Influential former Trump aide Steve Bannon — charged with defrauding people over funds raised to build the Mexico border wall, a flagship Trump policy — was among 73 people on a list released by the White House.

However, neither Trump nor his relatives were listed, amid speculation he could use the legally dubious tactic of a preemptive pardon to fend off future charges.

The rapper Lil Wayne, who last month pleaded guilty to possession of a firearm and ammunition by a convicted felon, and faced 10 years in jail, also made the list.

Tensions have soared on Capitol Hill, where the Senate is expected to put Trump on trial soon following his record second impeachment by the House of Representatives over the Capitol riot.

The spectacle will clash with the opening days of Biden's tenure, as the new president seeks to swiftly confirm his Cabinet picks and push through ambitious legislation — including a $1.9 trillion rescue package.

'I'll get right to work'

"We don't have a second to waste when it comes to tackling the crises we face as a nation," Biden tweeted late Tuesday.

"That's why after being sworn in tomorrow, I'll get right to work."

He plans to kick off his tenure by rejoining the Paris climate accord and the World Health Organization, according to aides, who said Biden would sign 17 orders and actions just hours after being sworn in, setting new paths on immigration, the environment, COVID-19 and the economy.

In first-day moves, he will end Trump's much-assailed ban on visitors from several majority-Muslim countries and halt construction of the wall that Trump ordered on the US-Mexico border to stem illegal immigration, the aides said.

His inaugural speech will last between 20 and 30 minutes, according to a source familiar with preparations, and "he will reach out to all Americans, and call on every citizen to be part of meeting the extraordinary challenges facing all of us."

To symbolize the new spirit of unity, Biden has invited the two top senators — Democrat Chuck Schumer and Republican Mitch McConnell — and other congressional leaders to attend a church service with him Wednesday before the inauguration.

Overseas leaders weighed in to mark the end of a presidency which has deviated from orthodox American foreign policy.

Iran's President Hassan Rouhani hailed the White House departure of "tyrant" Trump, saying "the ball is in America's court" to return to a landmark nuclear deal and lift sanctions on Tehran.

Meanwhile, Ursula von der Leyen, president of the European Commission, said the inauguration would "be a demonstration of the resilience of American democracy," as well as "the resounding proof that, once again, after four long years, Europe has a friend in the White House."

﻿
Special Reports
﻿
Biden to be sworn in as 46th US president, ending Trump era
Trump delivers farewell speech touting achievements during presidency
UK shellfish protesters raise a stink over Brexit
Baby Blimp will live on as a legacy for Trump
Fire sparks false alarm in jittery Washington as troops hit streets
Norway says no links between deaths and vaccine
Thai woman gets record lese majeste jail sentence
Spaniards slayed Aztecs who ate their comrades
One in eight in England have had COVID: official data
Trump orders assessment of security risks of Chinese-made drones in US fleet
EXPLORE SHINE