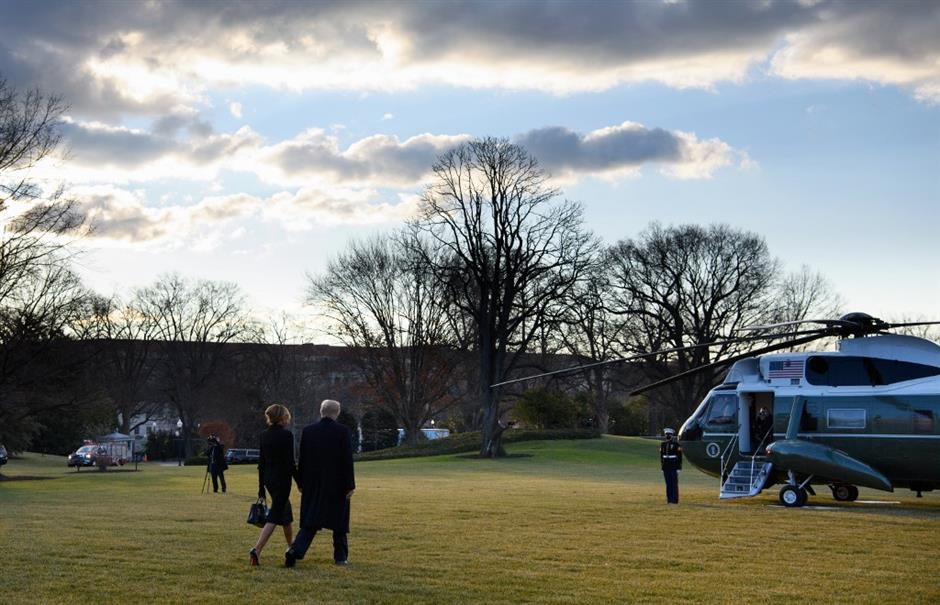 US President Donald Trump and First Lady Melania Trump make their way to board Marine One as they depart the White House in Washington, DC, on January 20, 2021. President Trump travels to his Mar-a-Lago golf club residence in Palm Beach, Florida, and will not attend the inauguration for President-elect Joe Biden.

President Donald Trump left the White House for the last time on Wednesday, skipping the inauguration of successor Joe Biden as the 46th US president in an extraordinary break with tradition.

Drawing a curtain on the most tumultuous administration of modern times, Trump is being ousted by a polar opposite with the Democrat Biden intent on charting a new course to tackle COVID-19 and unite a splintered nation.

A small crowd waved goodbye as Trump, 74, and First Lady Melania Trump walked a short red carpet and boarded the Marine One helicopter shortly after 8:15 am (1315 GMT), for the short flight to the air base where they will continue to Florida on board Air Force One.

"I just want to say goodbye," Trump told the gathering, calling his time in office "the honor of a lifetime."

Trump will be at his Mar-a-Lago resort in Florida when Biden, a 78-year-old former vice president, is sworn in at noon on the US Capitol's western front.

Biden and Vice President-elect Kamala Harris will take the oath of office at the very spot where pro-Trump rioters clashed with police two weeks ago before storming Congress in a deadly insurrection.

While a transition of power will occur much as it has for more than two centuries, this inauguration is unlike any other.

Official Washington has taken on the dystopian look of an armed camp, protected by some 25,000 National Guard troops tasked with preventing any repeat of this month's attack.

And with the pandemic raging, the general public is essentially barred from attending the swearing-in, leading to the unprecedented sight of an empty National Mall on Inauguration Day.

With the death toll soaring past 400,000, Biden on Tuesday led a powerful tribute to victims of COVID-19 as he arrived in Washington.

"It's hard sometimes to remember, but that's how we heal. It's important to do that as a nation," Biden said in somber remarks in front of the Lincoln Memorial, once more stressing the need to unite the country after Trump's chaos.

On the Mall's grassy expanse, some 200,000 flags have been planted to represent the absent crowds at the inauguration.

Trump broke days of silence Tuesday with a pre-recorded farewell video address in which — for the first time — he asked Americans to "pray" for the success of the incoming administration.

But Trump has yet to personally congratulate Biden, who first ran for president in 1987, on his win, and the 11th-hour message followed months spent persuading his Republican followers that Democrat cheated his way to election victory.

In one of his last acts before departing the White House, Trump issued scores of pardons to people convicted of crimes or facing charges, including several key allies.

Influential former Trump aide Steve Bannon — charged with defrauding people over funds raised to build the Mexico border wall, a flagship Trump policy — was among 73 people on a list released by the White House.

However, neither Trump nor his relatives were listed, amid speculation he could use the legally dubious tactic of a preemptive pardon to fend off future charges. 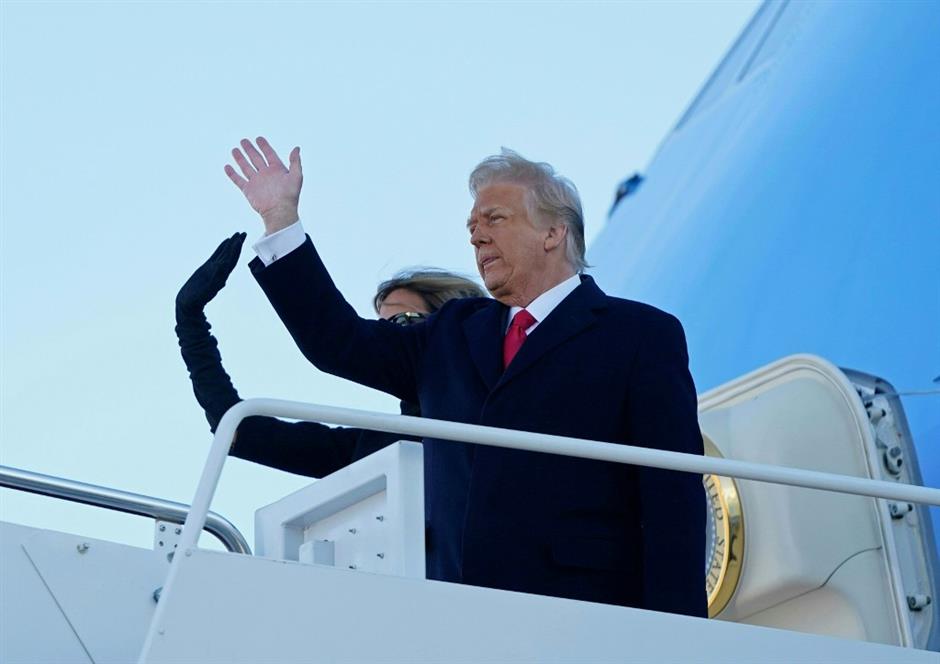 US President Donald Trump and First Lady Melania Trump wave as they board Air Force One at Joint Base Andrews in Maryland on January 20, 2021. President Trump and the First Lady travel to his Mar-a-Lago golf club residence in Palm Beach, Florida, and will not attend the inauguration for President-elect Joe Biden.

The rapper Lil Wayne, who last month pleaded guilty to possession of a firearm and ammunition by a convicted felon, and faced 10 years in jail, also made the list.

Tensions have soared on Capitol Hill, where the Senate is expected to put Trump on trial soon following his record second impeachment by the House of Representatives over the Capitol riot.

The spectacle will clash with the opening days of Biden's tenure, as the new president seeks to swiftly confirm his Cabinet picks and push through ambitious legislation — including a US$1.9 trillion rescue package.

'I'll get right to work'

"We don't have a second to waste when it comes to tackling the crises we face as a nation," Biden tweeted late Tuesday.

"That's why after being sworn in tomorrow, I'll get right to work."

He plans to kick off his tenure by rejoining the Paris climate accord and the World Health Organization, according to aides, who said Biden would sign 17 orders and actions just hours after being sworn in, setting new paths on immigration, the environment, COVID-19 and the economy.

In first-day moves, he will end Trump's much-assailed ban on visitors from several majority-Muslim countries and halt construction of the wall that Trump ordered on the US-Mexico border to stem illegal immigration, the aides said.

To symbolize the new spirit of unity, Biden has invited the two top senators — Democrat Chuck Schumer and Republican Mitch McConnell — and other congressional leaders to attend a church service with him Wednesday before the inauguration.

Overseas leaders weighed in to mark the end of a presidency which has deviated from orthodox American foreign policy.

Iran's President Hassan Rouhani hailed the White House departure of "tyrant" Trump, saying "the ball is in America's court" to return to a landmark nuclear deal and lift sanctions on Tehran.

And Ursula von der Leyen, president of the European Commission, said the inauguration would "be a demonstration of the resilience of American democracy," as well as "the resounding proof that, once again, after four long years, Europe has a friend in the White House."