Germany gets tough to fight against coronavirus 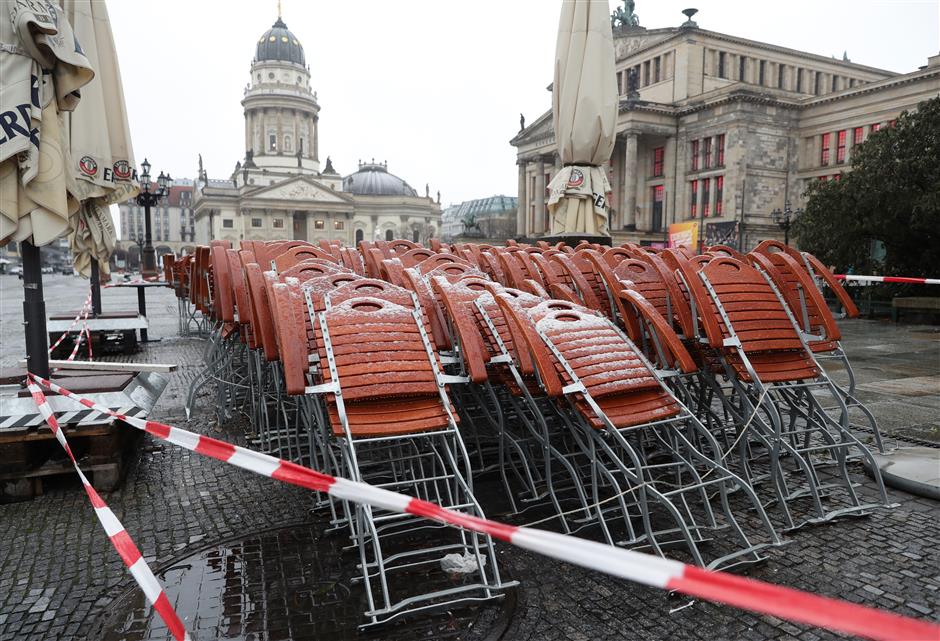 Tables and chairs piled up outdoors at the Gendarmenmarkt in Berlin on Tuesday.

Germany on Tuesday toughened a partial lockdown and extended it to February 14, with Chancellor Angela Merkel warning of possible border checks to contain “the danger” of new coronavirus variants believed to be more contagious.

Speaking after hours of crisis talks with the leaders of Germany’s 16 states, Merkel said the latest restrictions were necessary as “a precaution for our country, the health of our citizens and also for the economy.”

Merkel and the state premiers agreed to make medical masks mandatory on public transport and in shops, meaning only surgical masks or the so-called FFP2 masks will be allowed.

They also said employers must make it possible for staff work from home wherever it is feasible.

The measure goes beyond previous appeals to companies to do more to keep people out of offices and off public transport.

“All our efforts to contain the virus are threatened by a serious danger,” Merkel told reporters, pointing to a new strain that has sparked a surge in infections in Britain and Ireland.

“There is still time to contain the danger,” she said. “We must act now.”

Germany closed restaurants, leisure and sporting facilities in November, then expanded the shutdown in mid-December to include schools and most shops to halt runaway growth in new coronavirus infections. They will all remain closed until February 14.

Merkel’s spokesperson Steffen Seibert said earlier the measures so far had brought about a “flattening of the infections curve,” noting that the number of patients in intensive care had fallen slightly.

Tuesday’s talks between Merkel and state premiers were brought forward by a week because of concerns over virus variants recently discovered in South Africa and Britain.

Merkel said Germany would use an EU summit tomorrow to call for “synchronized measures” to rein in the spread of the new strains.

She warned that Europe’s top economy may have to install border checks if neighbors fail to find a deal within the bloc, noting many cross-border commuters every day.

“If countries should decide to take different paths­ then you have to be ready to say then, we’ll have to reintroduce border controls. We don’t want that, we want to find an agreement with our partners,” she said.

Germany survived the first wave of the coronavirus pandemic relatively well, but a second wave hit the country hard.

New infections have soared far above the 50-per-100,000 -people threshold set by the government. Last Thursday, the country saw a new high in daily deaths with 1,244.

On Tuesday, daily deaths reached 989 though health authorities said they might have been inflated after a lag in weekend reporting.

Seibert noted on Monday that the rate was still at over 130 per 100,000 people, and that Germany “must more quickly” bring that down to 50.