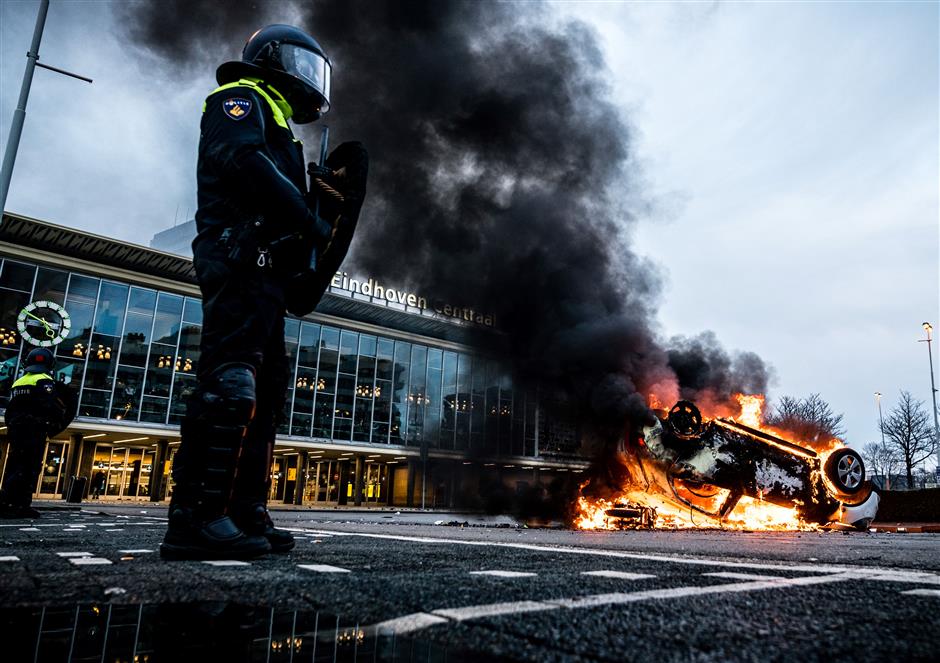 A car on fire in front of the railway station in the Dutch city of Eindhoven on Sunday after a riot by several hundred people over a COVID-19 curfew imposed by the government.

The unrest came on the second day of new, tougher coronavirus restrictions, including a night curfew, which had prompted demonstrations.

Police used water cannon, dogs and mounted officers to disperse a protest in central Amsterdam on Sunday afternoon. Nearly 200 people, some throwing stones and fireworks, were detained in the city.

National broadcaster NOS said riot police had been deployed in at least 10 cities and towns after a curfew went into effect at 9pm. Vehicles were set alight, police were pelted with stones and public property was destroyed, it reported.

Military police said on Twitter on Sunday night that they were supporting local police in at least two cities in the south.

Images on Dutch television showed bands of youths looting shops, throwing bicycles and setting fires in the southern city of Eindhoven. At least 55 people were arrested in Eindhoven.

The demonstration in Amsterdam’s Museum Square, which violated a ban on public gatherings, came the day after the government introduced a nightly curfew for the first time since World War II.

Police cleared the square after protesters ignored instructions to leave and detained those who attacked them with stones and fireworks, the mayor’s office said.

Parliament voted narrowly last week to approve the curfew, swayed by assertions that a variant of COVID-19 first identified in Britain was about to cause a new surge in cases.