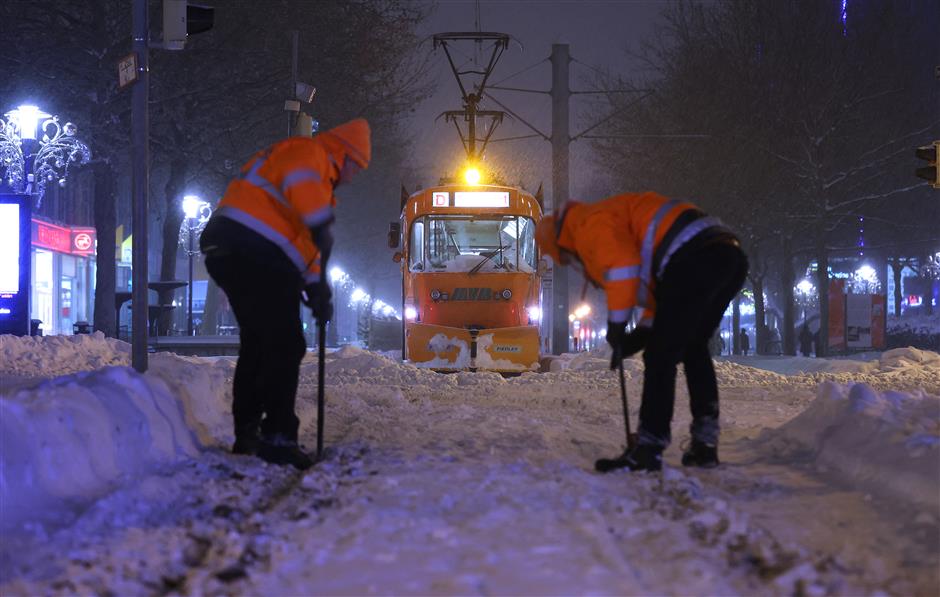 Staff of the transport services clear tram tracks during a winter storm in Magdeburg, eastern Germany on Monday.

Freezing drivers were stranded for hours in traffic jams in Germany as Europe was pummeled by the heaviest snow in years.

Traffic on a motorway near the German city of Bielefeld was brought to a standstill by heavy snowfall overnight on Monday into yesterday, with some drivers trapped for at least 16 hours, according to media reports.

The bottleneck, caused by lorries stuck in the snow and stretching over 37 kilometers, had still not been cleared by yesterday morning, local police said.

Video footage showed shivering drivers huddled in their vehicles, complaining of going for hours without food as temperatures plunged to minus 12 degrees Celsius.

Severe jams were also reported in Hesse, where some drivers were stuck in their cars for 15 hours Transport Minister Andreas Scheuer asked residents to avoid setting out on journeys until today at the earliest.

Train services across the country have seen severe delays and cancellations, with snow and ice clogging the rails.

Snow is expected to decrease in the coming days, but temperatures as cold as minus 18 degrees Celsius mean travel will remain hazardous.

With the wind-chill factor, temperatures could feel as low as minus 30 degrees Celsius at night.