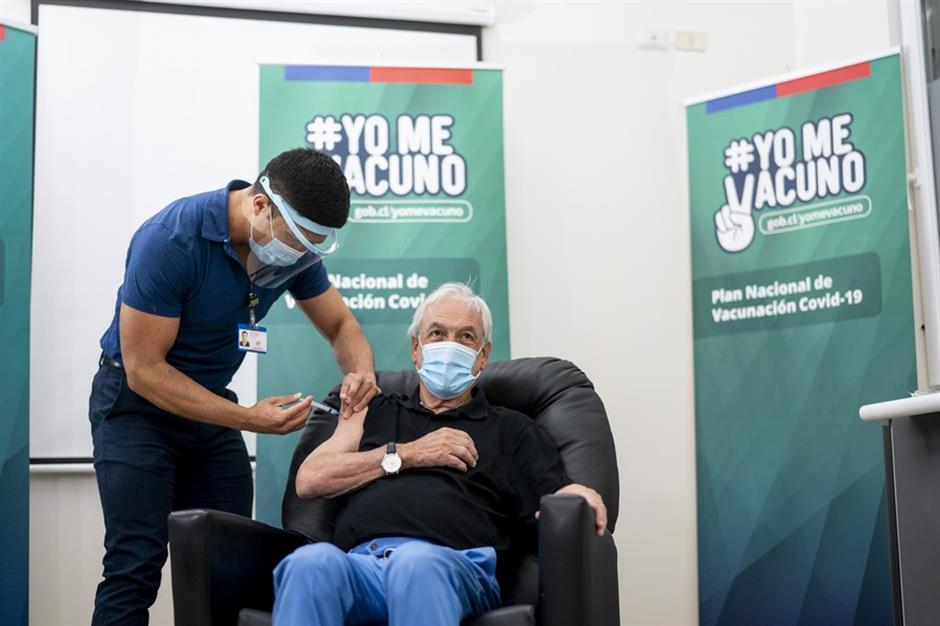 Chilean President Sebastian Pinera receives the COVID-19 vaccine developed by Chinese firm Sinovac at a health center in Futrono, a city in the southern region of Los Rios, Chile, Feb. 12, 2021.

Chile's President Sebastian Pinera on Friday received the first dose of the CoronaVac vaccine developed by Chinese pharmaceutical firm Sinovac against the novel coronavirus disease, along with those aged 71 and over.

While visiting a community healthcare center in the southern region of Los Rios, where the president spends his austral summer vacations, Pinera joined more than 1.5 million Chileans in receiving at least the first dose of the vaccine.

The president took the opportunity to send a message of confidence to the public regarding the application of Sinovac's CoronaVac vaccine, the one most used as part of the national vaccination drive.

"I want to tell all my compatriots that this vaccine is safe, it is effective, and we have made an enormous effort to be able to vaccinate all Chileans," Pinera told reporters at a press conference after getting vaccinated.

As of Thursday, 1,550,594 people had received the COVID-19 vaccine in Chile, part of the 5 million inhabitants in high-risk groups that are to be vaccinated in the first quarter of 2021.

The nationwide campaign began with the arrival in January of two shipments of vaccines from Sinovac, which will continue to ship doses to Chile over the coming weeks.

The government aims to vaccinate about 15 million people in the first six months of the year with about 35 million doses from various pharmaceutical companies.

Chile is dealing with a new wave of COVID-19 infections, mainly in the north and south of the country, and reported 764,307 confirmed cases and 19,262 deaths from the disease as of Thursday, according to the Ministry of Health.