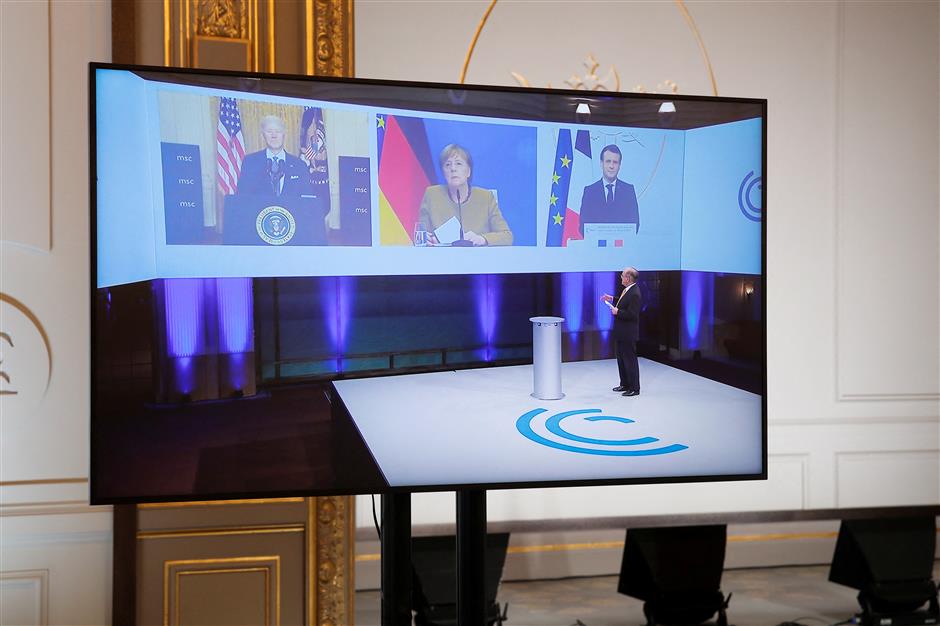 A picture taken on February 19, 2021, at the Elysee Palace in Paris shows the screen as French President Emmanuel Macron attend a video-conference meeting with US President Joe Biden and German Chancellor Angela Merkel during 2021 Munich Security Conference, amidst the coronavirus disease outbreak.

German Chancellor Angela Merkel told the special virtual edition of the Munich Security Conference on Friday that multilateralism provided the basis for all political activities and that multilateral organizations should be strengthened.

"I think the past two years have made it clear that this belief in multilateralism is the right thing. The fight against the pandemic makes this clear once again," she said.

Regarding the ongoing COVID-19 crisis, Merkel cited World Health Organization Director-General Dr. Tedros Adhanom Ghebreyesus, who also spoke at the event, as saying that "if you cannot make sure that everyone is vaccinated, if the virus is not defeated all over the world, no one will be safe."

"No one will have the chance to be safe against this virus, because there will be mutations again and again," Merkel said, adding that "we have to make sure that everyone in the world is quickly given access to vaccines."

Merkel also said that multilateral organizations, such as the World Bank, the World Trade Organization, the WHO and the International Monetary Fund "must be strengthened once again."

The MSC is an international meeting held annually in February since 1963. Its original aim was to shore up commitments and help coordinate western defense policies. It has since grown to involve representatives from around the world and served as a platform for debates on global security issues.

Due to the COVID-19 crisis, the special event was held at the Hotel Bayerischer Hof in the German city of Munich and the speakers participated virtually from their respective locations.