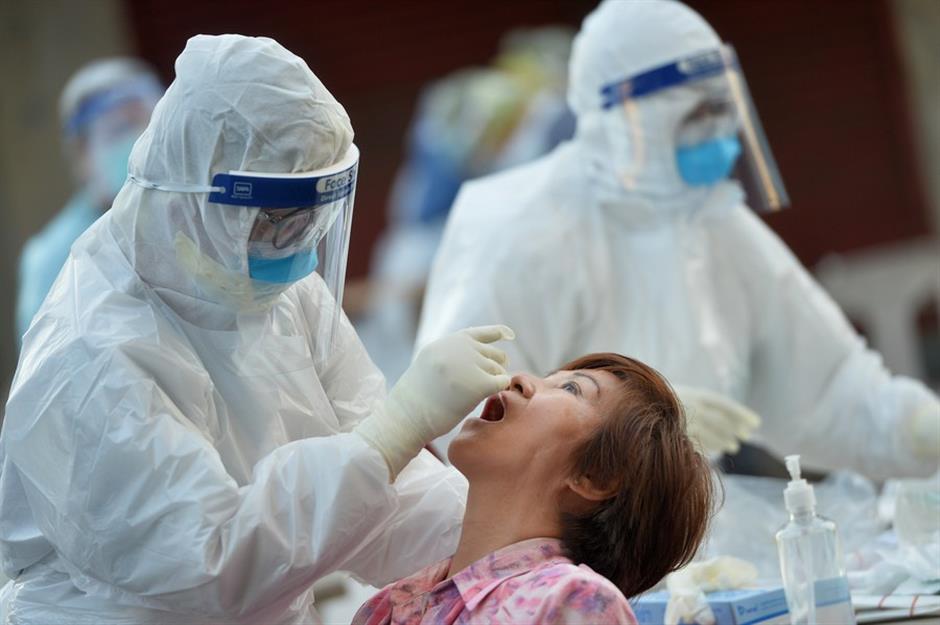 A health worker collects a swab from a woman for a COVID-19 test in Samut Sakhon province, Thailand, on December 22, 2020.

Thailand has approved Sinovac Biotech's COVID-19 vaccine for emergency use, paving the way for the country to receive its first vaccine shipment of 200,000 doses from the Chinese biopharmaceutical firm on Wednesday.

The country's Food and Drug Administration (FDA) has cleared the Sinovac vaccine for emergency use, and the first batch, aboard a Thai Airways International plane, is scheduled to arrive at Bangkok's Suvarnabhumi international airport Wednesday morning, Thai Deputy Prime Minister and Minister of Public Health Anutin Charnvirakul said Tuesday.

The authorization for the Sinovac vaccine will be valid for one year, according to the FAD approval letter that Anutin posted on his Facebook page.

Prime Minister Prayut Chan-o-cha will go to the airport to observe the delivery of the Chinese vaccine, said a government official, who requested anonymity due to lack of authority.

Prayut said on Monday that he may be among the first people in the country to get vaccinated with the Sinovac vaccine.

The first Sinovac shots will be administered to at-risk groups, including medical workers, those who may be dutifully bound to make close contact with infected patients and those with chronic illnesses, among others, the Center for the COVID-19 Situation Administration spokesman Taweesin Visanuyothin said Tuesday.

The 200,000 doses, excluding 16,300 doses to be stored in reserve, will be sent to 13 provinces with high infection rates and economic significance. Samut Sakhon province, where the new wave of outbreak was first detected, will be assigned with 70,000 doses, the most among the regions, according to Taweesin.

Samut Sakhon now remains the only province under the highest risk category with continued containment measures.

The capital Bangkok will be given 66,000 doses, while four provinces, namely Chonburi, Phuket, Chiang Mai and Surat Thani (including Koh Samui), which are largely considered as the country's economic movers, will together share 14,700 doses, he said.

The Southeast Asian country ordered 2 million doses from Sinovac, with the second batch of 800,000 doses scheduled for delivery next month, followed by the third batch of 1 million doses in April.

On Tuesday, Thailand's total COVID-19 caseload rose to 25,599, with more than four-fifths of the infections being detected since the new wave of outbreak erupted in mid-December 2020.