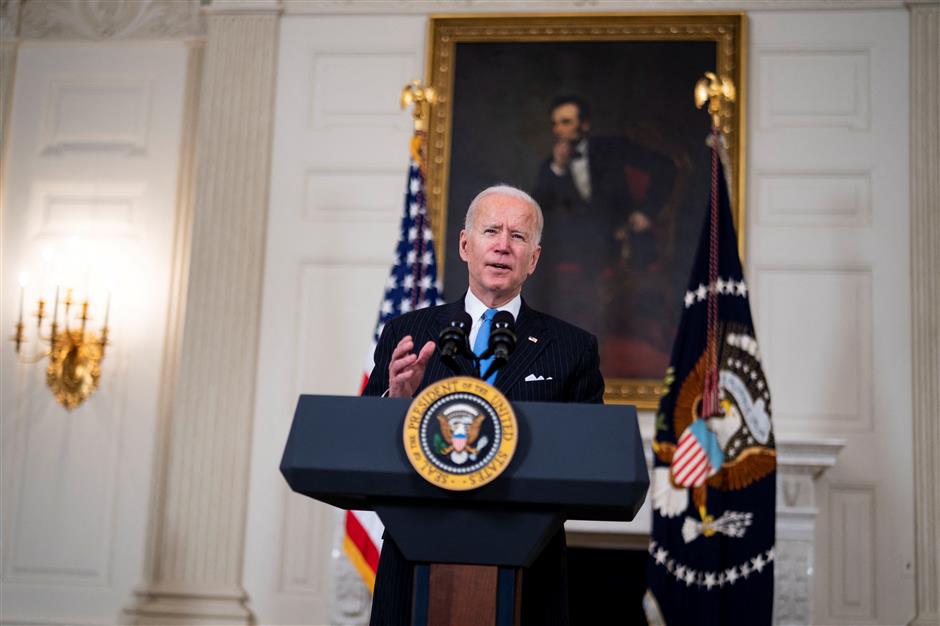 US President Joe Biden speaks in the State Dining Room of the White House on March 2, 2021, in Washington, DC.

President Joe Biden said on Tuesday the United States would have enough vaccines for its entire adult population by the end of May, as he announced a deal for pharma giant Merck to produce the shot developed by rival Johnson & Johnson.

"This is the type of collaboration between companies we saw in World War II," said Biden in announcing the pharmaceutical accord.

"We're now on track to have enough vaccine supply for every adult in America by the end of May," said the US leader — who previously targeted late July to amass sufficient doses to inoculate all Americans.

"That's progress. Important progress. But it is not enough to have the vaccine supply," Biden said, stressing that a "wartime effort" still lay ahead to administer the vaccines once acquired.

Merck will use two of its facilities to "produce drug substance, formulate and fill vials of J&J's vaccine," according to a Department of Health and Human Services (HHS) statement.

Biden's administration will leverage the Defense Production Act to provide an initial US$105 million for Merck to convert and equip its facilities to safely manufacture the vaccine, the statement said.

The J&J vaccine is the third to receive US regulatory approval for emergency use, but the first that requires a single shot as opposed to two jabs.

HHS said this would enable J&J to deliver close to 100 million doses to the United States by end May — instead of June as previously pledged.

J&J said in a statement it was "pleased" to work with Merck, which will "enhance our production capacity so that we can supply beyond our current commitments."

But "now is not the time to let up," warned the president, calling on Americans to keep following social distancing protocols and wearing a mask even as new coronavirus cases fall and more are vaccinated.

"Great news, but stay vigilant," Biden said. "It's not over yet."

The J&J shot appears slightly less protective than Pfizer and Moderna's regimes, which have an efficacy of around 95 percent against all forms of COVID-19. But all three have been shown to fully protect against hospitalizations and death.

A major vaccine producer in its own right, Merck had begun work on coronavirus vaccines, but abandoned those efforts in January, saying the immune responses that were "inferior" to successful COVID-19 vaccines.

The agreement between Merck and J&J follows on the heels of an accord between Pfizer/BioNTech and French pharma giant Sanofi, which plans to produce 125 million doses at a factory in Frankfurt, Germany, after Sanofi's own vaccine candidate fell short.